Modern medicine focuses too much on extending life and too little on making sure that's the kind of life patients want. Using conversational skills like those of psychiatrists, that can change for the better. 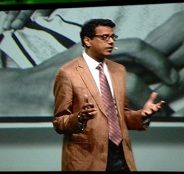 Addressing the American Psychiatric Association 2016 meeting in Atlanta, GA, Gawande noted that psychiatrists talk to patients about death “day in and day out” probably their most common topic other than sex he said.

But, bringing his own non-expert views to the art of patient conversation, Gawande said he learned that most physicians have much to learn from psychiatrists in talking to people the issue of dealing with mortality. That conversation is one focus of his latest best-seller “Being Mortal.”

Some health problems cannot be fixed, and while physicians, patients, and family members know that intellectually they often are frozen with indecision when faced with choices on how much care should be given in a terminal illness or a patient’s sudden decline.

Gawande said he often had to do that as a cancer surgeon and felt he wasn’t very good at it. So he asked himself and then his colleagues “What does it mean to be great at what we do,” in this case in guiding care for the seriously ill.

Medicine can keep people alive far longer than at any point in history, he said.

“We get to live and spend our lives with little need to be fearful of death,” he said, unlike people who lived before antibiotics and other medical advances that enable people to survive illness and accidents that would have killed our ancestors. 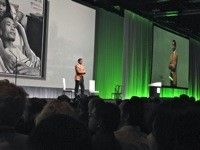 But medicine has fallen short when it comes to giving people the best kind of lives they might have in their last months.

“We’ve lost sight of the fact that well-being is more important than survival,” he said.

To that end, Gawande through his work at Ariadne Labs, a joint center of Brigham and Women’s Hospital and the Harvard T. H. Chan School of Public Health have come with a guide offering specific questions and tips on how to speak to such patients.

One of his first realizations, Gawande said, was that when he as a cancer surgeon talked to seriously ill patients about their fears and wishes, “I was doing 95% of the talking,” instead of drawing the patients out in conversation.

In the “Serious Illness Conversation Guide,” he spells out specific ways to do that.

He suggests opening the conversation with “I’m hoping we can talk about where things are with your illness and where they might be going — is this okay.”

It is useful to address patients’ fears and worries, he said, asking “What are your most important goals if your health situation worsens?”

In deciding what to recommend as treatment, and what care a physician might suggest withholding, another important question is “What abilities are so critical to your life that you can’t imagine living without them?”

Too often he said, patients end up in prison-like conditions in nursing homes, where the goal is to keep them safe—but at the cost of their autonomy.

Most patients want that autonomy, though their family members and caregivers tend to put safety first.

“In between we get suffering,” he said. He told of a nursing home patient who was restricted to a pureed diet because she had some dementia. The woman hated the diet and was repeatedly caught stealing cookies, for which she was scolded, and her kids were called.

It was humiliating and punishing.

“I couldn’t help but think, just let her have the damn cookies,” he said, but of course the staff was worried about her safety. That is part of being institutionalized.

Often when loved ones make care decisions in a crisis they do not realize what they are signing on to get.

For instance, keeping a patient alive may mean that patient will never leave hospital or skilled nursing care. They won’t get better and come home.

When his own father was coping with terminal cancer, the answer to that question was that he wanted to be able to sit at the dinner table and engage fully with his family, Gawande said.

The time came when his father could no longer do that, and that was when they knew it was time to stop interventions that would have him spend long last days in hospital care. “That conversation guided our decisions and we just kept him free from pain,“ he said.

The full guide and question list is available through his The center works to improve health care by taking new approaches similar to Gawande’s revolutionary work in coming up with surgical checklists to prevent surgical accidents, as described in his book the "The Checklist Manifesto."

Their research has found that use of the conversation guide not only reduced patients’ depression and anxiety, but that patients who had those conversations as part of early palliative care actually ended up living 25% longer than patients with similar health problems who did not get such care.

Psychiatry is all about the power of talk, he told his audience.

Medicine may value drugs too highly, and engaging with a patient on an emotional level too little.

"We undervalue time and conversation," he said.