A 60-year-old man with left ventricular dysfunction resulting from nonischemic cardiomyopathy was followed in an ambulatory heart failure clinic.

At the initial baseline examination, the patient had a left ventricular ejection fraction (LVEF) of 0.23, documented by radionuclide angiography. A baseline echocardiogram showed an enlarged left ventricle, with dimensions of 62 mm in end-diastole and 53 mm in end-systole. There was moderate-to-severe mitral regurgitation, mild-to- moderate tricuspid regurgitation, and a right ventricular systolic pressure of 50 mm Hg demonstrated by echocardiography.

HF V 341 device was implanted uneventfully without any peri-implant complications.

During longitudinal cardiac surveillance, the patient’s cardiac status began to exhibit signs of deterioration. His left ventricular size and systolic function worsened on serial evaluation: the left ventricle enlarged to 65 mm in end-diastole and 56 mm in end-systole, and his LVEF was estimated to be <0.20. These changes were accompanied by a decline in systolic blood pressure and worsening functional status. His peak oxygen consumption was initially 19.4 mL/kg/min, but declined during serial evaluation to 9.7 mL/kg/min (37% predicted). He was referred for cardiac transplant evaluation.

While awaiting a donor heart, the patient was hospitalized after an episode of syncope. On admission, he had underlying atrial fibrillation and was ventricularly paced achieving a rate of 80 beats/min; his blood pressure was 94/62 mm Hg, and his oxygen saturation was 95% on room air. The patient was afebrile. The jugular venous pressure was 5 cm above the sternal angle, and no S3 was audible. His chest was clear on auscultation, and there was no peripheral edema. At the time of presentation, his hemoglobin level was 13.8 g/dL, serum sodium level was 127 mmol/L, and serum creatinine level had worsened to 2.22 mg/dL (196 mmol/L). Examination of his ICD showed that he had experienced numerous episodes of ventricular tachycardia at rates between 120 and 160 beats/min, resulting in antitachycardia pacing and multiple shocks from his ICD. The patient was admitted to the Coronary Care Unit, where intravenous amiodarone (Cordarone, Pacerone) and mexiletine (Mexitil) were administered. His ICD was reprogrammed so that only ventricular rates between 140 and 160 beats/min were monitored. The patient continued to have episodes of sustained slow ventricular tachycardia, with associated lightheadedness, nausea, and diaphoresis.

An electrophysiology study was planned; however, the evening before the procedure, the patient became asystolic, with failure to capture despite active ventricular pacing. Cardiopulmonary resuscitation was initiated, the patient was intubated, and after 45 minutes of advanced cardiac life support, his pulse returned. Neurologic recovery from this event was poor, and after discussion with the family, life support was withdrawn. Autopsy results showed cardiomegaly, with a cardiac mass of 600 g, dilatation of all heart chambers, and extensive regions of interstitial fibrosis. 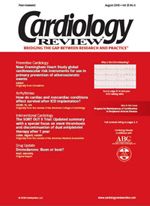 A 60-year-old ICD patient with comorbid conditions
In-stent thrombosis after temporary discontinuation of aspirin therapy
Multivariable cardiovascular risk-assessment instrument in action
Novel genetics and insights related to supraventricular arrhythmias
A misleading ECG
Drug-eluting stents: Weighing the pros and cons of this therapy and its alternatives
The SORT OUT II trial: Updated summary with a special focus on stent thrombosis and discontinuation of dual antiplatelet therapy after 1 year
Dronedarone: Boon or bust?
MOC Questions
ICD implantation: Knowing when to hold'em
How do cardiac and noncardiac conditions affect survival after ICD implantation?
An ounce of prevention is worth a pound of cure...
New Framingham Heart Study global cardiovascular risk instruments for use in primary prevention of atherosclerotic events
New Framingham Heart Study global cardiovascular risk instruments: Helping physicians optimize their patients' cardiovascular care
Letter to the editor: Corticosteroids and AF
Related Videos
Related Content