GATHER2 reports a 14.3% reduction in mean rate of growth in GA area over 12 months with avacincaptad pegol compared to sham.

The pivotal, late-breaking findings were presented at the 2022 American Academy of Ophthalmology 2022 Annual Meeting in Chicago, Illinois.

“Both GATHER1 and GATHER2 studies have shown us that we see a treatment effect early with avacincaptad pegol that increases over time,” said Arshad Khanani, MD, Director of Clinical Research, Sierra Eye Associates at the presentation. “Avacincaptad pegol is the first, investigational therapy in GA to achieve the 12-month prespecified primary endpoint in 2 pivotal phase 3 studies."

The agent is a pegylated RNA aptamer designed to be a specific inhibitor of complement C5. The inhibition of C5 slows inflammation and cell death associated with the development and progression of GA. The C5 inhibition additionally has the potential to preserve the anti-inflammatory properties of C3a.

Its primary endpoint was the mean rate of growth in GA area from baseline to month 12, using a slope analysis and square root transformation. The study in the second year then re randomized avacincaptad pegol treated patients to either monthly avacincaptad pegol or every-other-month. The sham group continued on the sham injection.

These findings are the first-time, primary month 12 results. Key inclusion criteria were considered standard for complement inhibitor trials, including age ≥50 years and best-corrected visual acuity (BCVA) between 20/25 and 20/320.

The GATHER2 trial met the prespecified primary endpoint with a high degree of statistical significance at year. Investigators observed an early separation of treatment effect, which continued over time.

In prespecified analysis, the benefit of avacincaptad pegol was observed in all prescified subgroups based on different baseline characteristics. This was determined to be consistent with the GATHER1 trial findings. 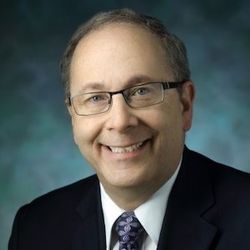 David B. Glasser, MD: The Larger Implications of Telehealth in Ophthalmology
Advertisement