In a very unsurprising development with an even less suspenseful potential next step, a bill that would partially repeal the Affordable Care Act (ACA) has landed on President Obamaâ€™s desk. With a muffled thud. 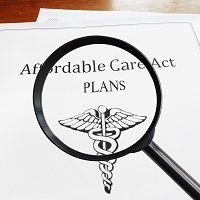 In a very unsurprising development with an even less suspenseful potential next step, a bill that would partially repeal the Affordable Care Act (ACA) has landed on President Obama’s desk. With a muffled thud.

Wednesday evening, the House of Representatives voted 240-181 to forward the bill on to the president. The bill previously passed the Senate under special rules protecting it from Democratic obstruction. The political machinations are complicated but largely beside the point; the president has promised a veto of a bill that would leave his most singular accomplishment as president in tatters.

The bill itself calls for preventing the federal government from running healthcare exchanges, would eliminate insurance mandates and subsidies, and repeal Medicaid expansion now adopted in 30 states and the District of Columbia. Other than that, it leaves the ACA mostly alone.

Democrats and supporters of the ACA have hailed the law as a tremendous success, noting that more than 16 million Americans have gained health coverage since the law was enacted. But

Republicans and other opponents have argued that the law has driven up costs and hurt consumers. Opponents have cited the number of insurance companies, including coverage giant

UnitedHealthcare, that have either dropped or are considering pulling out of the ACA exchanges.

As the campaigning for the 2016 elections hits full swing, the GOP party line of repealing the ACA, known by many as ObamaCare, has reached a fever pitch. The GOP has seemingly made repeal the party’s central focus. The Senate bill, which Republican leaders understand has zero chance of passing, is intended more as a statement of opposition and a jumping off for future GOP plans that would replace the law should the next president be a Republican.

The bill also included language that would terminate the roughly $450 million yearly in federal dollars that go to Planned Parenthood, about a third of the organization’s budget. The group has been a beacon of controversy during the campaign season and is a frequent target of the religious right.

President Obama has 10 days to veto the bill.