Electroconvulsive therapy could be an effective tool in reducing veterans' severe depression and suicides, a panel said. Kitty Dukakis, the wife of former Gov. Michael Dukakis and an advocate for ECT, was a panelist, 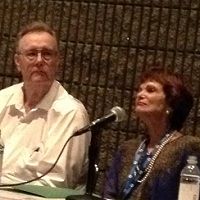 Electroconvulsive therapy (ECT) is a far safer and more finely tuned treatment than it was in its heyday in the 1950s.

But thanks in part to the film “One Flew Over the Cuckoo’s Nest” in which the character played by Jack Nicholson has his personality all but wiped out by an ECT session, the therapy has yet to overcome the stigma it has not just with the public but with many practitioners.

In a forum at the American Psychiatric Association’s 2016 annual meeting in Atlanta, GA, a panel of patients and physicians said the therapy can be miraculous. They urged the Veterans Health Administration to use it to treat post-traumatic stress disorder (PTSD) and other mental health conditions.

The speakers included Kitty Dukakis,79. the wife of Massachusetts’ former governor and outspoken advocate of ECT, a therapy that helped her pull out of a profound depression.

Dukakis said before her ECT treatments she had tried many other therapies. “I went to the best hospitals in Boston, I tried all the treatments,” but nothing seemed to work. After 17 years of battling her illness she finally had ECT, and that turned her back into her old self, she said.

Her husband later said he was struck by how ironic it was that “I lost 16 years of my life when right around the corner there was a place where I could have had ECT.”

She has since had some memory problems, Dukakis said, but at her age she thinks that’s normal.

“My sister is 15 months younger and her memory is worse than mine,” she said.

Panelist Jim Bush, (in photo with Kitty Dukakis) a US Marine Corps veteran who worked in artillery and served in Viet Nam through three major Tet Offensive battles, said he had long suffered from severe depression and had considered suicide.

“ECT helped with my headaches,” Bush said, and after the treatments he found he was able to benefit from a veterans support group.

He still has memory problems but that is not a bad price to pay for being able to enjoy life with his friends and family again.

The discussion was led by Peter Hauser, MD, a VHA psychiatrist based in California and the panel included two veterans who, though still housebound, said they had essentially gotten their lives back through ECT treatments.

“We are underutilizing one of the most effective and rapid-onset treatments we have, particularly given the high rates of suicide among vets,” Hauser said.

The VHA is not even offering ECT in all of its 140 facilities, with only 53 equipped to administer the treatment, though another 31 contract with outside centers to offer ECT.

“The use of ECT in VHA hospital is uncommon even though adverse events with ECT are rare,” he said.

ardiologist, and ventilation with 100% oxygen.

In the 1950s, he said, the amount of electricity used was “What comes out of a wall socket.’

“In the old days they’d just turn it up to the max, but now it is done similar to dose-titration,” Weiner added.

Psychiatrists used ECT in 1950s because there were so few alternatives, and due to the side effects of the early treatments, ECT was all but abandoned when effective drugs came along.

“The pendulum is starting to swing back again,” he said.

There is a risk of relapse and patients usually get six to 12 months of ECT along with drugs and psychotherapy.

The most common reasons patients ask to stop treatment is that ”They’ll say they just feel so good they don’t need anymore therapy,” he said.

But without adjunctive drug therapy, relapses will occur within six months.

Memory can be affected, though not severely or irreparably, he said.

“Does it alter the brain? No, to the extent that it is altered it is changed in a good way,” he said.

But there is an art to administering ECT and much variability in practice.

Expanding ECT in the VHA system should come with a plan to give teams the training they need to master that skill, he and others said.