An observational study of psoriatic arthritis patients indicated that initial levels of C-reactive protein are correlated with a poor response to disease modifying anti-rheumatic drugs and the eventual need for treatment with tumor necrosis factor-alpha inhibitors. 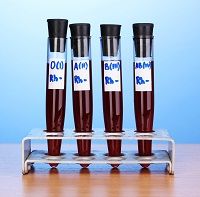 An observational study of psoriatic arthritis patients indicated that initial levels of C-reactive protein are correlated with a poor response to disease modifying anti-rheumatic drugs (DMARDs) and the eventual need for treatment with tumor necrosis factor-alpha inhibitors (anti-TNFs).

Investigators followed 71 consecutive patients who were diagnosed with psoriatic arthritis and tried to differentiate patients who did and did not respond to DMARDs.

Physicians started 81.6% of the newly diagnosed patients on methotrexate and started all the rest on some other DMARD. Follow-up visits showed that 37 of the 71 patients (52.11%) had an inadequate response to DMARDs, which, in turn, led to the use of at least on anti-TNF medication.

Investigators then compared outcomes with baseline information about each patient and found that initial levels of C-reactive protein were correlated with the eventual need for anti-TNF drugs (hazard ratio [HR], 1.8; 95% confidence interval [CI], 1.27—1.85; p = 0.009). Patients with baseline levels of C-reactive protein > 0.9 mg/dl, moreover, started anti-TNF treatment significantly earlier than other patients who started on such treatments.

“There are, as yet, no known clinical or laboratory parameters to identify patients at high risk of an inadequate response to a [non-steroidal anti-inflammatory drug] and/or DMARD, who would then require biological therapy with a TNF inhibitor,” the study authors wrote in the Isreal Medical Association Journal.

“The present long-term, single-center, observational study of a ‘real life’ inception cohort shows for the first time that elevated C-reactive protein level at diagnosis is significantly predictive of earlier need for treatment with a TNFα inhibitor drug to control disease activity in psoriatic arthritis.”

The investigators also compared baseline levels of erythrocyte sedimentation rate and the eventual need for anti-TNF medications, but they found no correlation.

The investigators wrote that diagnosis with psoriatic arthritis, unlike diagnosis with rheumatoid arthritis, is not correlated with elevated levels of either C-reactive protein or erythrocyte sedimentation rate but that higher rates of acute-phase reactants are associated with rapid disease progression and early mortality.

Elevated baseline rates of C-reactive proteins have also been found to predict longer treatment with and better response to anti-TNF treatments. For example, a study of 764 Danish patients published in 2011 found that baseline C-reactive protein levels > 10 mg/l was predictive of improved response on American College of Rheumatology (ACR) scales measuring the percentage reduction in symptoms (odds ratio 2.6 for ACR20, OR 3.0 for ACR50, OR 3.6 for ACR70).

The authors of the new study noted several limitations in their work, including its retrospective nature and the lack of information about patient obesity, which is a significant independent cause of elevated levels of C-reactive protein. The new study also focused on a relatively homogenous patient population. Just over half of the cohort was made up of Ashkenazi Jews, while nearly all the rest was made up of non-Ashkenazi Jews.

Still, the investigators expressed confidence in the reliability of their conclusions, though they did not recommend that physicians use high baseline levels of C-reactive proteins to start newly diagnosed psoriatic arthritis patients on anti-TNF medications rather than DMARDs.