The prevalence of HPV infection in US females aged 14-19 is approximately 25% and in females aged 20-24 it is increased to approximately 45%. Despite this high risk, in 2013, only 38% of females aged 13-17 have received all three recommended HPV vaccine doses. One contributing factor to the low vaccination rate is the concern that HPV vaccination would increase “high risk” sexual behavior in vaccinated patients. This study compared incidence of STI infection over time in HPV vaccinated and unvaccinated US females.

The study group was comprised of insured females aged 12 to 18 years for whom pharmacy and medical claims data was available from 41 large employers across the United States during the time period from January 1, 2005, through December 31, 2010. ICD billing codes were used to select females who had received all 3 recommended doses of the HPV vaccination. Age matched controls who had not received vaccination were selected from the same data set. The incidence of STI infection over time was determined in the vaccinated females and the age matched controls using medical claims for the following infections: chlamydia, syphilis, gonorrhea, herpes, and HIV/AIDS. The study also analyzed if STI incidence varied for vaccinated vs. unvaccinated females with prior documented contraceptive use.

The study showed while the incidence of sexually transmitted infection did increase with age, there was no statistically significant difference in STI infection over time in the HPV vaccinated population vs. the unvaccinated population. This was also true in females with prior contraceptive use.

HPV Vaccination in adolescent females is not associated with increased incidence of sexually transmitted infection.

In 2006, the FDA approved the first HPV vaccine, which is recommended for all females aged 9-26-years- and all males between the ages of 9 and 26 years. . Despite these recommendations, vaccination rates for HPV remain very low; in 2013 only 57% of females aged 13-17 had received at least one dose of the vaccine and only 38% had been fully vaccinated.

There are many factors contributing to this low vaccination rate. Among them is the concern that providing vaccination against HPV lessens the perceived consequences of high-risk sexual behavior in adolescent females. This study demonstrated no difference in STI infection over time in the HPV vaccinated vs. unvaccinated females.

This study included a large sample (n=208,111) of females aged 12-18 years. The control group was well-matched based on age, geographical location, and prior contraceptive use. A limitation of this study, was it only included patients with private health insurance and relied on insurance claims to determine HPV vaccination status, contraceptive use, and treatment of sexually transmitted infections. Women with publically funded insurance may have other risks and different behaviors than this study concludes.

The results of this study do not support the theory of an increased risk of sexual activity following HPV vaccination. Should this be a concern for parents in considering HPV vaccination for their children, primary care physicians should feel confident educating patients and their families regarding the risks (injection site discomfort) and benefits of vaccination as well as address the many fallacies about the vaccine. The other common fear of this vaccine was it was rumored to cause an increased the risk of severe neurological illness (including Guillain Barre Syndrome), which is also untrue (JAMA 2009; 302(7): 795-6)

And most importantly, physicians should discuss the risks of not vaccinating your child with the HPV vaccine. The HPV vaccine is one of only two cancer-preventing vaccines available (the Hepatitis B vaccine being the other). According to the World Health Organization, cervical cancer is the second most common cancer in women (http://www.who.int/mediacentre/factsheets/fs380/en/), the majority of which would be eliminated by broad use of the HPV vaccine. With the recent FDA approval of an even more efficacious HPV vaccine (http://www.cdc.gov/vaccines/schedules/hcp/imz/child-adolescent.html), patients and the community at large would derive benefit from universal acceptance of this vaccine. 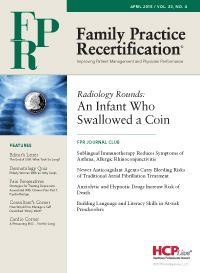 Improving Child Health by Screening for Social Determinants
Are Butter and Full Fat Foods Safe?
HPV Vaccination in Adolescent Females Not Associated with Increased Incidence of Sexually Transmitted Infection
Financial Incentives for Smoking Cessation in Pregnancy
Eat Fiber: One Simple Message for Weight Loss
An Infant Who Swallowed a Coin
The End of SGR: What Took So Long?
A Reassuring EKG... Not For Long
Strategies for Treating Depression Associated With Chronic Pain Part 1: Psychotherapy
How Would You Manage This Woman Who is a Self Described 'Worry Wart'?
Elderly Woman With an Itchy Scalp
Related Videos
Related Content