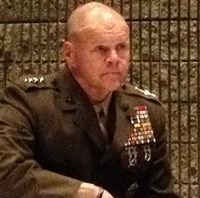 One of the hardest things a proud US Marine can do is ask humbly for help.

That is exactly what brought US Marine Corp’s Commandant Gen. Robert Neller (photo) to Atlanta, GA.

Determined to do something about suicides in Marine Corps service members and veterans, Neller, a four-star general had asked to speak at the American Psychiatric Association’s 2016 meeting.

"I’m here to get your thoughts and ask for your help,” Neller said, “This is really tragic.”

The suicide rate among veterans is rising, with an average 22 veterans daily taking their lives—mostly older vets, he said.

He did not provide a rate for Marines, though a spokesman later added that this year there have been 19 suicides of active duty and reserve Marines, with at least two other deaths currently under investigation.

Yet most Marine suicides are not men who have experienced combat trauma, he said.

The vast majority of suicides do not fit “that typical picture of the PTSD troubled vet,” Neller said.

Marine suicide rates track a national increase, but Neller said it is unacceptable in his organization, one that prides itself on being a family divided into small teams with members who have deep bonds and a tradition of taking care of each other.

He told a story of a Marine sergeant telling him that three of his friends had killed themselves, and asking the general “What are you doing about it.”

“I didn’t have a good answer for him,” Neller said, adding that the question started him on a quest to find one.

When recruiting young men and women “We don’t sell jobs, we sell a life of being a Marine,” he said.

That means stressing a warrior culture of “toughness, resiliency and being mission-oriented.”

They tend to be recent high school graduates, “Good warriors, fit, and aggressive, but they are young and dealing with a lot,” he said.

“Our country has been at war for 15 years now, and no one comes back from that unchanged,” he said.

That means coping with stress.

While Marines easily talk to each other about any physical ailments or injuries, he said they rarely talk about their mental state.

Having mental health issues is not for warriors, he said, but seen as a sign of weakness

The Marine Corps is trying hard to get better at helping its members, and is far more aware of the problem of post-traumatic stress disorder than in prior wars and decades.

“We send the psychiatrist out to make them talk” he said, “Pain shared is pain divided.”

But the latest statistics on suicide show that among Marines, it is more prevalent in those who have not been deployed to a combat zone.

The service has increased the numbers of mental health providers, started programs, crisis hot lines, and made unit leaders aware that they are responsible for uncovering troubled mental states in their team members.

Social media plays both a positive and to a lesser extent negative role in that task.

“It used to be when we handed out mail you could know right away from seeing someone read it if it was a bad letter,“ he said, one with news of a break-up, a death, or other event that could push a Marine into despair.

The positive part of social media is that team members can and do keep in touch and offer connection and support long after they leave the services—as 30,000 Marines do every year. There are currently 183,000 active duty Marines and 39,000 in the reserves.

Neller said he tells team leaders that it is easy to help someone fail—or to watch that happen&mdash;but the challenge is to help them succeed.

He is still mystified he said, by why some Marines go through devastating physical and emotional trauma and survive, while others fall apart over personal relationship crises, or other events.

Neller told the story of Kyle Carpenter, a young Marine who deliberately fell on a grenade in combat in Afghanistan to save the life of his best friend.

Carpenter survived, after 30 surgeries to repair his face, and his friend survived, despite the possibility he would have to deal with survivor guilt.

He is focused on getting healthy,physically and mentally, or as Neller puts it, moving on to his next success. .

“What allowed him to do this, to come through all this and say, yeah, the world is great,” Neller wondered, while other service members take their lives over lesser calamities.

He said he was reaching out to psychiatrists in the APA, their colleagues, and anyone who might know a service member struggling with mental health problems. He even offered a personal message to any Marines who might need assistance.

Editor's Note: The veterans' suicide rates stated in an earlier version of this story have been clarified in the text above.