The animal rights group PETA says its own legal action may have led to yesterday's US Center for Disease Control and Prevention's report on a celebrity elephant in Portland, OR that gave tuberculosis to seven humans. The group went to court to get other such reports and anticipates more revelations about TB hazards in zoos and circuses. 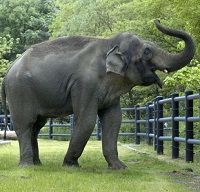 Animal rights activist organization PETA said it anticipates getting thousands of more pages of documents from the US Centers for Disease Control and Prevention that will show the hazards of TB transmission to humans from elephants in captivity.

PETA hopes to use those documents to get the federal government to reinstate rules on TB testing of captive elephants, regulations that were eliminated in October, 2015.

The group has been waiting for more than a year to get the documents. It had to take legal action to get the CDC to comply with the federal Freedom of Information Act to get the reports released, an act that PETA counsel Rachel Matthews said likely led the CDC to publish a report Jan 7 on seven people who were infected with TB by an elephant at the Oregon Zoo in Portland, OR.

That publication may signal a reversal of what PETA charges were "efforts from the CDC to keep documents related to the risk of elephant tuberculosis under wraps." she said.

As reported in MD Magazine the Oregon elephant, a star performer known as Rama the “painting elephant” for his ability to spray paint onto canvases as well as use a paint brush was one of three at the zoo to be diagnosed with TB. ()

“We’ve been told there are 5,500 pages of documents,” Matthews said.

PETA requested all CDC reports on “a few hundred elephants in the US” that are housed at zoos and circuses. That request was filed in June 2014, but the CDC began sending the documents only recently, she said.

Once it examines the documents, PETA expects to use the information to pressure federal authorities to reinstate mandatory TB testing requirements that were eliminated in October 2015.

In November, Matthews and representatives of five other organizations and legal activists protested. They wrote US. Secretary of Agriculture Tom Vilsack to “express our dismay and to seek a reconsideration” of those provisions of the Animal Welfare Act.

The rules required zoos and circuses to regularly test elephants for TB. When the rules were revised, the testing became voluntary.

In a December 8, 2015 response, Vilsack wrote that testing decision are better left to zoo and circus personnel and their veterinarians.

He also noted that “Regarding concerns about the potential for zoonotic spread between TB-positive animals and humans, this is a public health issue which states, local officials and on a federal level the CDC and the Occupational Safety and Health Administration are empowered to address” not the US Department of Agriculture.

Matthews dismissed that reasoning. “They are letting the fox guard the henhouse,” she said.

The extent of the TB problem is not known though some have estimated that 5% of elephants in captivity have a strain of TB that can be caught by people. The CDC in one study cited by PETA put the number is higher, at 12%.

In its complaint to the CDC’s parent organization, the US Department of Health and Human Services over the CDC’s failure to release documents, PETA noted that some Ringling Bros. and Barnum & Bailey circus elephants have tested positive for TB, but were allowed to perform publicly “exposing other elephants, circus staff, arena workers, and countless members of the public to the disease.”

Now that the documents are being released, PETA is pondering its next legal steps, she said.

Meanwhile the group is urging people to stay away from zoos and circuses with elephants.