States to Obama: Give Us that HITECH Grant Money!

Many states are seeing the HITECH money as an opportunity to aggressively promote health IT to improve healthcare through adoption of EHRs and health information exchanges.

Many states are seeing the HITECH money as an opportunity to aggressively promote health IT to improve healthcare through adoption of EHRs and health information exchanges.

The four states discussed below have vastly different plans for health IT, from the aggressive to the sublime.

Massachusetts: Since 2004, MA has become a national leader in implementing health IT. The most recent health IT bill, Senate Bill 2863, which set the groundwork for further state-led health IT initiatives and large-scale health IT adoption among providers. This bill established the Massachusetts eHealth Collaborative, which is meant to oversee state health IT activities and promote adoption of health IT across the state, including the deployment of EHR systems networked through a statewide HIE.

A June 2008 survey questioned 18,282 physicians in order to test how much health IT uptake has been affected after four years of massive funding for health IT in MA. Of 519 who responded, roughly 36% use all “basic” EHR capabilities, which is about twice what is seen nationally. Unfortunately, only 5% of MA physicians “significantly use” advanced capabilities, which is just 1% higher than found nationally. In MA, 20% of prescriptions are sent electronically.

Arizona: The uptake of EMR technology throughout Arizona has been credited to a 2005 executive order by then-Gov. Janet Napolitano, which required that all healthcare providers install EHRs by 2010. A recent report has stated that there is a marked increase in physicians who are canceling their EHR contracts and deinstalling their expensive c-EHR software systems. This is especially prevalent among smaller physician groups. Deinstallations and failed installations will be among the biggest factors that will keep a national HIE from becoming a reality.

New Jersey: On January 8, 2008, NJ passed the A. 4044 bill that made it the first state to mandate a move toward EHRs. On May 11, 2009, another bill was proposed that would make it illegal to sell or otherwise distribute a non-CCHIT c-EMR in the state of NJ, applying penalties of up to $5,000 for multiple violations.

It seems that its main sponsor had numerous financial ties with lobbying groups, including HIMSS, the “State Alliance for e-Health,” and the “Healthcare Information Management Society,” as documented in his financial disclosures. The idea of manipulating competition as a quid pro quo by making the sale of a non-c-EHR system illegal is bad policy.

Maryland: On May 19, 2009, HB 706 was signed into law, mandating that all state-regulated health insurance payers (not just Medicare/Medicaid) need to provide monetary incentives to healthcare providers to adopt an EHR and use it in a “meaningful manner.” This law is meant to bolster the state’s efforts to create an HIE by October 2009.

With this bill, the state is trying to cut off all physician choice concerning HIT by making a licensed practitioner subject to a host of grants/penalties depending on the degree of “significant use” of EHR.

Several states are trying to aggressively promote health IT /HIEs/EHRs, even though c-EHR systems have only been adopted by 17% of physicians, with only 4% of physicians “significantly using” them.

Those legislators who are rushing HIT bills need to go slow, need to show due diligence in learning the nature and history of EHRs, and should consider the overall impact of health IT programs within the fiscal constraints of a recession. They should stay clear of improper lobbyist influence and associations with companies that may ultimately benefit from this health IT push.

The growth of health IT will evolve slowly; it can’t be rushed with poorly written laws.

Alberto Borges, MD, is in private practice and is an associate clinical professor of medicine at the George Washington University in Washington, DC. Check out his website at http://msofficeemrproject.com. 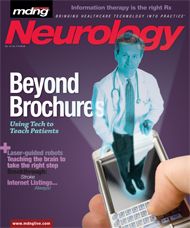 Does Blue-Green Algae Cause ALS? Paul Cox, PhD, Is on a Global Quest
Social Media Notebook: Oh, the Online Places You'll Go... or Not!
From the HCPLive Network: The Great Debate Borges vs. Kvedar
States to Obama: Give Us that HITECH Grant Money!
Saving for a Rainy Day: What is the Best Asset Protection Plan for Physicians?
Clinical Trial Registries: The Ultimate Balancing Act
Already in progress
5 Ways Google Can Make You a Better Doctor
Bonus or Bogus? Are federal funds for health IT a true stimulus, or merely a stopgap?
Don't Get Fooled Again: Insider's Tips on How to Tell the Difference between EHR Consultants and Resellers
Meeting Notes: ICAD 2009
Information Therapy: Patient Education at its Best
TechSectors: Medical Device - Teaching the Brain to Take the Right Step
Tech Tips: Uncle Sam Says "I Want You... to Use E-prescribing"
Medical Robotics: Laser Guided Robot
Related Videos
Related Content