From Pronouncement to Partnership: Understanding New Modes of Communication in a Changing Healthcare System

The dramatic change in healthcare delivery from private practitioner-based to managed care created a vacuum of responsibility for self care that the patient has needed to fill.

The dramatic change in healthcare delivery from private practitioner-based to managed care created a vacuum of responsibility for self care that the patient has needed to fill. In response to this, the lay cancer community has created a sophisticated model for offering and disseminating updated information for the Web-savvy information seeker. Its success has accelerated a fundamental change in the patient—doctor relationship which could not have been anticipated even 10 years ago.

The way in which patients acquired health and medical information traditionally followed a doctor-centric “You come, I listen, and I speak” model. However, after World War II, more collaborative models began to evolve. To bolster their own information base, patients used traditional sources: the library, newspapers, magazines, books, and friends. Childcare books from Dr. Benjamin Spock and others spoke to generations of parents on what to do, and what not do, about common health and developmental problems in children.

In the 1980s, people became more interested and proactive in their health as the tobacco law suits linking cancer and smoking became publicized and the early results of heart disease studies became better known. This information suggested that diet, exercise, and avoidance of smoking were the responsibility of the patient, not the healthcare system. Better educated people started to ask their physicians more questions.

The American Cancer Society (ACS) continued to be the public face of the American cancer community, but still was quite doctor-centric in its outlook. It challenged quacks but not its own physicians’ inability to communicate with the public. Its information models stayed “inside the box.” But Yankee ingenuity and resourcefulness soon filled an unmet and unrecognized need in the brain tumor world. Foundations were created by people personally affected by brain tumors: The National Brain Tumor Foundation (NBTF), The American Brain Tumor Association (ABTA), The Brain Tumor Society (TBTS), the Florida Brain Tumor Association (FBTA), and many others began to fund research in this area and provide help to the afflicted. People who had “been there” developed a database with pamphlets and networks of useful professionals to help others through the trauma of a brain tumor diagnosis. These foundations targeted brain tumor research that had been overlooked by traditional ACS and National Cancer Institute (NCI) funding. These heroes’ ideas were soon copied in other countries, and patient-centered brain tumor foundations sprung up in Australia, England, France, and elsewhere in the 1990s.

The end of an era

The healthcare “system” in the USA as we knew it started to unravel in the 1990s. Healthcare became more of a free-market business that placed greater responsibility on patients, beginning their long transformation into “healthcare consumers.” Significant developments that played a part in this included an explosion in the alternative health market, with vitamin and supplement makers making all sorts of claims about the health benefits of their products (up to and including that they can cure cancer); a lift on the ban prohibiting direct-to-consumer advertising promoting prescription drugs; the rise of Health Maintenance Organizations (HMOs), followed by limitation of treatments by HMOs and insurance companies based on cost; and the purposeful delaying of payment by insurance companies to physicians and hospitals. These and other events left patients with more questions than answers, questions that could hardly be accommodated during a 10-minute, HMO- or third-party-reimbursed visit. The result, predictably, frustrated doctors and patients.

Within the last 10—15 years, people with brain tumors had an alternative: they could use the Internet to find information about their condition, research treatment options, and seek other providers. Now, patients had online access to exactly the same data as practicing physicians. They could do their own MEDLINE or PubMed search. Brain tumor centers not only advertised in Time magazine to attract patients, but they had one-button connections on favorite websites as well. In a space of 10 years, a world library of all the available brain tumor data along with analysis, commentary, and personal anecdotes has filled cyberspace. The only thing lacking in this equation was context. Whose responsibility was it to put into the proper context the hundreds of pages of downloaded information patients started bringing with them to office visits?

Why the Internet for health? Well, it worked for movies, hotels, and rent-a-cars. It is accessible and private; and it provides information that, at least until recently, was not offered by the healthcare systems (many HMOs and other payers now provide cost-effectiveness information on their websites). According to recent studies, more than 80% of US Internet users have searched for healthcare information online, and 35% of them make medical decisions based on information learned online. When polled, 79% of these Internet users wanted to interact with their physicians via Internet. However, only 21% of physicians wanted to interact via Internet. Thus, a gap exists between provider preferences and healthcare consumer needs.

The Internet has changed the professional relationship in additional, unanticipated ways. With the democratization of knowledge, a shift has occurred in the balance of power. Patients can now know nearly as much about their condition as their doctor. Challenges to the doctors’ knowledge and treatment decisions based on patients’ own research have become more common. The roles of knowledgeable physicians have changed from pronouncement and data recitation to provision of contextual information. Negotiation rather than a physician edict has become the rule on whether to continue chemotherapy or delay radiation in a child. This has become an inhospitable landscape for physicians who do not want to collaborate with their patients.

But patients are not physicians. Though they can become experts in their own disease, they often do not understand the context of information they have gathered. There is a practical resolution. In a 30-minute clinic visit, I, and many of my colleagues, leaf through dozens of pages of downloads, sorting misinformation from in vitro or mouse studies, and anecdotes, to a shorter pile with bona fide useful information. “The Internet is a real-time democracy, but it is also unfiltered. Beware!” I tell my patients. Google searches for “brain tumor treatment” return links to dubious “natural” treatments along with legitimate information from major brain tumor centers. It is imperative that patients consult with their providers before acting on any information they find online, even if it is from a reliable and reputable source.

How do you teach patients to be successful information gatherers?

How can we as physicians help our patients keep their heads above water when searching for information following a diagnosis? First, you and your office staff have to buy into the role of mentoring your patients to be successful. Successful patients are organized. Tell them to get two file folders; in the first, they should store all financial information—hospital bills, insurance forms, replies, denials, letters of appeal, etc. In the second folder, they can file (in separate sections) business cards (yours, their other doctors’, consultants’, etc); blood tests and other lab reports; pathology reports; MRI scans (film and CD-ROMs if they have them) and dictated MRI reports; a list of questions to ask during office visits, answers they have received to previous questions, and notes on the visit; and second (and even third) opinions, including questions for the expert, the answers, and a copy of the dictated consultation. Even better would be to compile and store all this information electronically in a personal health record.

For some physicians, this may seem a natural extension of the patient—physician relationship. Others may be uncomfortable ceding this much territory and responsibility to their patients. In my experience, doing this will earn your patient’s respect, gratitude, and confidence.

In the story of Adam and Eve, Eve desired to taste of the fruit of the Tree of Knowledge of Good and Evil. She was challenging the higher authority and wanted to be equal in knowledge. What was the lesson? Challenge a higher source and you get expelled from the Garden. But is this punishment, or the act of becoming conscious? Our view of the banishment from Eden as punishment is best illustrated in Michelangelo’s 16th-century ceiling painting in the Sistine Chapel depicting Eve and Adam leaving the Garden in disgrace. Seventy-five years earlier, however, a young painter named Masaccio decorated the walls of the Brancacci Chapel in Florence with an entirely different Expulsion scene. This one portrayed Adam and Eve being led by an Angel with upturned sword in the right hand (a friendly gesture) into adulthood (consciousness of their mortality) and with rays of light (knowledge) radiating over Adam’s right shoulder. The logic of these contrasts is that the acts of becoming conscious, leaving the fantasy of Eden, and confronting authority and acknowledging one’s mortality are painful and difficult, but normal, transitions from childhood to adulthood.

This sequence parallels in some ways the process patients undergo following a cancer diagnosis. One leaves Eden (the time before knowing about the tumor), suffers with the disease or treatment, and needs to confront the fact of eventual mortality. Many oncologists tell me that it is common for patients to initially think of their brain tumor as a punishment. Yet, we have a paradigm with a basis in 15th century art that suggests that knowledge and questioning can lead to empowerment. Patients nowadays, in part thanks to access to previously unavailable knowledge and information, feel empowered to challenge the physician as the ultimate authority on their disease.

Although patients are smarter and betterinformed than ever, and are to be encouraged to take a more active role in their treatment, they should not discount the value of their oncologist’s expertise, authority, and experience, which can be a major factor in determining their treatment outcome. For example, we have known since at least 1984 that children with leukemia have better survival if placed on clinical trials, in which they typically receive state-of-theart care. Another example of the importance of individual physician expertise can be seen in the effect of neurosurgeons’ resection of medulloblastoma. Our study of 210 patients from the Children’s Oncology Group clearly showed that if the neurosurgeon left less than 1.5cc of tumor, the survival was 75%; yet, if more than that remained, survival dropped to 50%. This is also true for supratentorial PNETs and ependymomas.

The Internet has made this information available to the public as well. Recently, I was asked by a patient for referral to a “two-log reducer” neurosurgeon! Data from a University of Michigan study demonstrated that highvolume cancer centers have better survival rates and fewer surgery-related deaths.

The data is clear. The public’s access to online information is producing a class of empowered “medical shoppers” who are comfortable seeking the highest quality product, challenging authority, and demanding an equal voice in making treatment decisions. 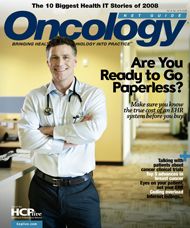 The Right System for the Right Price: To Avoid EHR Sticker Shock, You Have to See the Big Picture
From Pronouncement to Partnership: Understanding New Modes of Communication in a Changing Healthcare System
Opportunities and Challenges: A Time to Reflect at the End of a Busy Year
What Should Oncology Professionals Teach Their Patients about Clinical Trials?
The Year in Breast Cancer: The Top Five Under-appreciated Developments of 2008
Code Overload
One Last Look back: The 10 Biggest Health IT Stories of 2008 4
Communication Breakdown: Technology in the Exam Room
Related Videos
Related Content