Couldn’t make it to the Henry B. Gonzalez Convention Center in San Antonio, TX December 10—14, 2008 for the San Antonio Breast Cancer Symposium (SABCS)? Don’t worry, we’ve got you covered, with highlights straight from the convention center, thanks to our editors, who covered the best of the 2008 SABCS. This year’s symposium, the first SABCS to be presented by the CTRC, AACR, and the Baylor College of Medicine, encompassed “the full spectrum of breast cancer research” and was designed to “facilitate the rapid transition of new knowledge into improved care for breast cancer patients.”

Giving tamoxifen for 2 years followed by 3 years of anastrozole (sequencing strategy) improved relapse-free survival and overall survival compared to 5 years of tamoxifen in postmenopausal women with newly diagnosed, hormone-sensitive, early breast cancer, according to analysis of the sequencing arm and the total population in the large, prospective, randomized ABCSG 8 trial.

Although other landmark trials of adjuvant hormonal therapy have confirmed the superiority of aromatase inhibitors (AIs) over tamoxifen in preventing breast cancer recurrence in patients with early breast cancer, ABCSG is the first to show that patients live longer when treated with an AI. “As distinct from other trials, mature data from ABCSG 8 show a high overall survival benefit,” said Raimund Jakesz, MD, Vienna Medical School, Austria, who presented results.

A benefit of sequencing was observed regardless of age, Dr. Jakesz said. “Women with high expression of ER/PgR did particularly well,” he noted. Those with eR+++/PgR+++ enjoyed longer relapse-free survival and overall survival, he noted.

Analysis of the total study population of 3714 showed that sequencing therapy with anastrozole improved relapse-free survival by 27% (P=.001) in patients according to actually received therapy, and sequencing improved overall by 22% (P=.032).

The study turned up no new concerns about safety. As in previous trials, more bone and joint pain was reported in patients taking an AI, and more gynecologic symptoms were reported in the tamoxifen group.

When an individual patient asks a physician, “What is my risk of getting breast cancer,” the physician has little to offer. “For a woman sitting in my office, her risk is either 0 [she won’t get breast cancer] or 100% [she will get breast cancer],” explained JoAnn Elmore, MD, University of Washington, Seattle, WA. “The ideal risk model needs to work well for the individual woman, so we can counsel her, but we have lots of work to do before we have an ideal risk prediction model,” she said.

The Gail model, developed in 1989, is widely used to estimate expected cancer incidence among populations, but not individuals. This model is based on agreed-upon risk factors that include age, age at first period, age at first birth/or nulliparity, number of first-degree relatives with breast cancer, and history of benign atypical hyperplasia of the breast.

“Websites, such as the American Cancer Society, get hundreds of thousands of hits by women attempting to use this model to estimate their risk of developing breast cancer,” Elmore explained.

A study by Rockhill et al. attempted to validate the Gail model in 82,109 women enrolled in the Nurses’ HealthStudy. Over the first five years of the study, about 1000 women developed breast cancer (1.65%). The expected incidence, according to the Gail model, was 1.55%, “so the risk model worked well at a population level,” Elmore said.

The validation study also found, however, that many of the women diagnosed with breast cancer did not turn out to have high risk factors. In fact, 42% had a lower risk level than cancer-free counterparts. “Among 47 women with a high Gail risk score followed for five years, only one will be diagnosed with breast cancer,” she stated. “The Gail model is equivalent to a coin flip for an individual patient,” she said.

Why is it so difficult to develop an ideal risk prediction model? Elmore said that many risk factors are not highly sensitive or highly specific. Moreover, among most women, the risk is too small to be predicted.

Effects of Aromatase Inhibitors and Tamoxifen on Coagulation Factors

Tamoxifen, long considered the gold standard for treating estrogen-receptor (ER) positive, early-stage breast cancer, is known to increase the risk of thrombotic events (blood clots). This is of particular concern for women who have clotting disorders. Investigations have been ongoing to determine if aromatase inhibitors (AIs), also approved for treating postmenopausal women with eR-positive tumors, similarly increase a patient’s risk for thrombotic events. Data from various studies suggest that although AIs may increase the incidence of thrombotic events in cancer patients, the risk is not as great as it is with tamoxifen.

Researchers in Edinburgh, Scotland, conducted an open, randomized, pharmacodynamic study to determine whether different AIs affected individual blood coagulation factors differently. They also wanted to find out how switching from an AI to tamoxifen might further affect blood coagulation. Investigators recruited 120 postmenopausal women with invasive ER+ breast cancer, described as “otherwise healthy,” and randomized them to receive 16 weeks of adjuvant therapy with either letrozole (Femara), anastrozole (Arimidex), or exemestane (Aromasin). Following the initial 16- week treatment period, all the patients were switched to tamoxifen.

At the outset of the trial, the researchers hypothesized that because AIs reduce the level of circulating estrogens, their effect on coagulation would be either positive or negligible. Instead they found that the AIs did affect coagulation factors, but not all of the AIs affected every factor in the same manner. Results were evaluated using covariate analysis. Researchers determined the following:

• Only minor changes were seen in any coagulation factors for patients who received the nonsteroidal AIs anastrozole or letrozole.

• Exemestane, the only steroidal AI, significantly reduced levels of the anticoagulants protein C and ATIII, which investigators suggested might predispose patients to an increased risk of thromboembolic disease.

• The non-steroidal AIs produced a significant increase in vWF from baseline, but the mean percentage change did not differ significantly from that seen with exemestane.

• The effects of tamoxifen on coagulant levels were significant and complex; tamoxifen significantly decreased levels of protein C and the anticoagulant ATIII, which investigators theorized might “explain the increased risk of deep vein thrombosis observed with this drug.” The agent also caused a significant increase in protein S free.

Alternating mammography and MRI every 6 months appears to be the best way to detect cancer in high-risk women, an M.D. Anderson study found. This strategy can identify cancers not found by mammography alone, said Huong Le-Petross, MD, assistant professor, Diagnostic Radiology, who presented a retrospective pilot study at a poster session during the San Antonio Breast Cancer Symposium.

“Standard of practice for high-risk women is to perform mammography and MRI every year at the same time. We wanted to see if imaging women every 6 months with alternating modalities would improve detection yield,” she said.

The study was based on a retrospective chart review of 334 women who participated in a high-risk breast cancer-screening program from January 1997 to December 2007 and had one to four MRI screening cycles. Women were deemed high risk if they had hereditary breast and ovarian cancer syndrome, a personal history of breast cancer, a biopsy indicating atypia or lobular carcinoma in situ, or a 20% or higher lifetime risk of developing breast cancer according to the Gail Model.

Of these women, 86/334 (26%) underwent alternate mammography/MRI alternating every 6 months. The other 248 women either had prophylactic mastectomy or initiated chemoprevention strategies. All study participants had a clinical breast exam every 6 months. Median follow-up was 2 years (range, 1-4 years).

“MRI identified the majority of cancers, while mammography picked up only three of nine. For five of the eight MRI-detected cancers, the mammogram from 6 months earlier was normal or showed benign findings. The global picture is that MRI can pick up breast cancers that mammography cannot,” Dr. Le-Petross said. Future studies are needed to confirm these findings.

Longer follow-up will be needed to determine whether earlier detection with an alternative imaging strategy will be lifesaving. “We are challenging the gold standard—mammography,” she said.

With a growing number of studies suggesting aromatase inhibitors (AIs) are superior to tamoxifen as an adjuvant treatment for early stage ER-positive breast cancer, researchers from the Royal Marsden Hospital in London, United Kingdom, decided to find out how Oncotype DX would fare in predicting distant recurrence for patients treated with aIs.

Using Oncotype DX, Mitch Dowsett, PhD, and colleagues from the ATAC Trialists’ Group analyzed tumor samples from 1231 women enrolled in the ATAC (Arimidex, Tamoxifen, Alone or in Combination) trial. All the patients had been treated previously for early stage ER-positive breast cancer with tamoxifen or anastrozole monotherapy.

Investigators performed a multivariate analysis, adjusting for tumor size, grade, age, and treatment. Dr. Dowsett said, “Our multivariate analysis confirms that along with other standard measures such as tumor size, Oncotype DX contributes independently to providing a more complete picture of prognosis.” He added that the information provided by Oncotype DX would be useful in helping clinicians make chemotherapy decisions “for both node-negative and node-positive early stage breast cancer patients planned for either anastrozole or tamoxifen treatment.”

In addition to validating the benefit of Oncotype DX in predicting distant recurrence, researchers said they found a lower risk of recurrence in patients treated with aIs regardless of node status. At 5 years, the rate of recurrence was 9.1% in the tamoxifen monotherapy group versus 7.8% for those in the anastrozole group; at 9 years, 15.6% of women who received tamoxifen had experienced recurrence compared with 13.2% of women who took anastrozole.

Dr. Dowsett and associates evaluated the same set of patients using Adjuvant! Online. They concluded that Oncotype DX had “highly statistically significant predictive value for distant recurrence beyond that provided by Adjuvant! Online.”

As the use of AIs continues to expand, clinicians needed an accurate means to predict recurrence risk and help clinicians tailor chemotherapy to their patients with early stage ER-positive breast cancer. Dr. Dowsett said that his team’s study “demonstrated for the first time that RS is an independent predictor of distant recurrence in node-negative and nodepositive hormone-receptor—positive patients treated with anastrozole.” 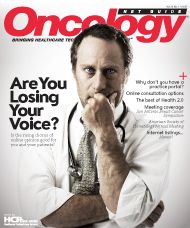 31st Annual San Antonio Breast Cancer Symposium
50th Annual Meeting of the American Society of Hematology
Tumor Xenotransplantation: The Ultimate Testing Platform for Chemotherapy Drugs
Are You Losing Your Voice?
Get Connected with Online Physician Consultations
Provide Your Patients with an Online Resource You can Both Trust...Your Own!
Influential Online Communities
Is a Web Presence Worth the Effort?
Where Do We Go from Here? A Health 2.0 Progress Report
Related Videos
Related Content