There may be a link between the inflammatory proteins that cause rheumatoid arthritis and the development of heart valve disease. 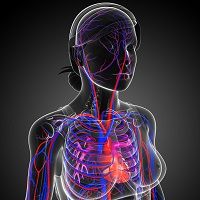 There may be a link between the inflammatory proteins that cause rheumatoid arthritis (RA) and the development of heart valve disease, according to findings published in the Proceedings of the National Academy of Sciences.

Researchers from the Walter and Eliza Hall Institute in Australia used mice models of polyarthritis in order to determine the link between excess production of tumor necrosis factor (TNF) that causes both RA and the onset of heart valve disease. The researchers found critical regions of DNA that control the production of TNF.

“People with RA have too much TNF in their joints and in their blood,” study leader Philippe Bouillet, PhD explained in a press release. “We have identified a previously unknown way that the body destabilizes the molecules during the process of TNF production to stop too much of the protein being made. We could essentially develop agents that put a spanner in the works, stopping the factory production of TNF.”

Previous research had already established that there was a link between the overproduction of TNF and the development of RA, but this research is unique, the researchers explained, because they were able to pinpoint the regions of the DNA that control the TNF production.

One way to manage RA is to use anti-TNF drugs, though nearly half of patients become unresponsive to those drugs, the Bouillet continued. Targeting the regions in the DNA which unsettle the molecule could interfere with the protein production.

“This is the first time that we have linked the overproduction of TNF to heart valve disease,” Bouillet continued. “While it seems that genetics makes a substantial difference to the severity of the heart disease in our models, it does suggest that in humans we may be able to better diagnose heart valve disease in people with RA in the future.”

The researchers believe that their findings could influence the development of improved treatments for RA in addition to investigations of existing medicines that reduce inflammation to treat heart valve diseases.

“Clinicians have trialed drugs that target TNF in the past, but for diseases of the heart muscle and with poor effect,” Bouillet concluded. “Our studies suggest that excessive TNF drives heart valve — rather than heart muscle – diseases, and may be worth investigating for inflammatory diseases affecting the heart valves, such as rheumatic heart disease.”