Changing Treatment Approaches in the Management of Plaque Psoriasis - Episode 15

Unmet Needs in the Treatment of Psoriatic Disease

A group of specialists discusses unmet needs in psoriatic disease including physician education about biologics and research about treatment options for pediatric patients, patients with malignancies, and patients who are pregnant.

Brad Glick, DO, MPH:Neal, what are some of the unmet needs that we see with these patients with psoriatic disease?

Neal Bhatia, MD: We talked about this before a little, and I’ll still divide it between the unmet needs of the patients and the unmet needs of the dermatologist. Because in the patients, we’re learning more about that in pediatrics now that a lot of pivotal trials are done, and we’re hearing about patients of color. Obviously, there are comorbidities that go along with skin and joints. We’re collaborating with rheumatologists. That’s still on the rise, and the unfortunate part of that is we’re heavily reliant on pharma dollars to bring us those data, which require our support, for not only participating but also supporting them in some of their endeavors and bringing that education to us. The bigger equation is that there are a lot of dermatologists who don’t feel as if they’re part of the biologics conversation. They feel like the immunology is above their head. They don’t write enough, nor do they want to. Their access to information is often limited to promotional programs from the industry or meetings that they don’t feel as if they’re a part of because they hear the same voices and see the same faces talking about biologics. They think there’s some club of which they are not a part. Something is going on with dermatologists, because these are some of the smartest people around, yet they’re the first ones putting their hands up and saying, “I don’t want to write these voices.”

I don’t understand what it’s going to take to open some eyes and say, “I understand what’s going on. We’re treating the big picture for these patients.” One of the biggest unmet needs is for dermatologists to drop their guard, get involved a little more, and understand. George and I were part of an initiative that took on the question and reversed the script that said, why are dermatologists not writing biologics? What are the fears? What are the misconceptions? What are the obstacles? We hear so much about why you should you write X biologic for whatever reason. We don’t have enough conversations about why you’re not writing biologics. If you see what it’s doing to the patients who don’t get access to the drugs because we’re not putting pen to paper—not because insurance companies aren’t paying for them but for whatever reason—that’s probably the biggest unmet need: getting dermatologists out of their own way and starting to understand the process of what’s best for the patients in the long run.

Brad Glick, DO, MPH:Erin, do you see other unmet needs in the setting of psoriatic disease?

Erin Boh, MD, PhD, FAAD: Yes, there are a few, 1 of which is something that I’d like to see explored: what do we do with our patients who have a malignancy or who have had a malignancy? All the studies that we have that get these drugs to market involve excluding patients with a history of any malignancy for 5 years. They’re over it, but you have a patient on a biologic, and they’re going to get a malignancy—maybe it’s age related, or maybe it’s gender related, like prostate or breast cancer, or maybe it’s not related to the fact that they are on a biologic. What do we do with those patients? Nobody will do those studies because they don’t want to go there. I don’t know how we would obtain those data, but it would be interesting to find out what we can use in terms of patients who’ve had a malignancy and if it gets treated. Can you put them back on a biologic?

The other unmet need is similar but not malignant: pregnancy. Patients get pregnant and have terrible arthritis along with their psoriasis. Heretofore, we’re supposed to stop the biologic for the whole time that they’re pregnant. Well, untreated psoriasis is a much worse comorbidity for a pregnant woman than being on a biologic because that degree of systemic inflammation causes small birth-size babies and other problems with pregnancy, but we don’t have good data on that. We have 1 anti–TNF [tumor necrosis factor] that looks at it in vitro for the most part. We rely on registry data, mainly from GI [gastrointestinal] medicine and other fields like rheumatology, to say what may or may not be safe. Those are areas where I’d like to have answers to questions because I don’t know what to do. I’m winging it, and it’s a big area because people are older and people get this disease and malignancies in particular. What can we say about them?

Brad Glick, DO, MPH: Our oncology partners don’t necessarily have a lot to say either, and they’re pretty much in the dark as well.

Erin Boh, MD, PhD, FAAD: They don’t even know the name of the drug, let alone what the adverse-effect profiles are.

Brad Glick, DO, MPH:I do agree, and I find that’s common.

If you’ve enjoyed the content, please subscribe to our e-newsletters to receive upcoming Peer Exchanges and other great content right in your in-box. Thank you, everyone. 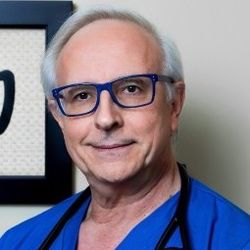