Investigators conducted an extensive literature review on clinical COVID-19 outcomes in patients with SCD or SCT to better navigate treatment during the pandemic.

New data from an extensive literature review found that while most studies reported mild to moderate COVID-19-related disease course in patients with sickle cell disease (SCD) or sickle cell trait (SCT), the literature suggests that SCD is associated with an increased risk of hospitalization and death from COVID-19, unless compared to controls with similar comorbidities and end-organ damage.

Lead investigator, Wouter Hoogenboom, PhD, Research Fellow, Department of Radiology, Albert Einstein College of Medicine, Montefiore Medical Center, explained that many of the risk factors for a poor COVID-19 outcome were the same between individuals with sickle cell disease or trait and the general population.

"And on top of that," he added "people with sickle cell also have sickle cell related symptoms, like pain crises, and acute chest syndrome, that also add to their vulnerability."

This study isn't the first one that the investigators conducted regarding the relationship between COVID-19 and sickle cell, according to Tim Duong, PhD, Professor, Vice Chair for Research Department of Radiology, Albert Einstein College of Medicine, Montefiore Medical Center.

Their previous study that examined a cohort of patients from the Bronx who had COVID-19 and sickle cell disease or trait, produced mixed conclusions.

With their latest study, the investigators decided to perform a critical appraisal of the literature in order to further understand and integrate the available data on the subject.

The rest of the interview will be published on HCPLive.com soon. Follow HCPLive® and the Rare Disease Report® on Twitter so you don't miss Hoogenboom and Duong discuss the nuances of their findings. 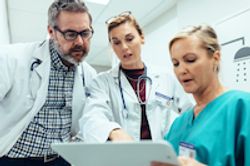