Hospital Variation in Use of Noninvasive Cardiac Imaging

Exploring the benefits of routine use of noninvasive cardiac testing for patients with suspected coronary ischemia. 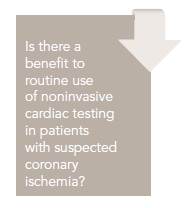 Patients with chest pain presenting to the emergency department (ED) are a heterogeneous group of patients who require costly evaluation and consume a great deal of resources. Despite a low likelihood of significant coronary artery disease in these patients, a missed diagnosis of acute coronary syndrome is associated with significant liability and adverse outcomes. The established diagnostic algorithms include history and physical, ECG, cardiac injury biomarkers, and various forms of stress testing (strevss nuclear myocardial perfusion imaging, stress echocardiography, cardiac positron emission tomography, and cardiac magnetic resonance imaging) or coronary CT angiography (CCTA) with or without calcium scoring. The use of diagnostic testing at the hospital level and its impact on downstream resource utilization and outcomes have been unclear.

Safavi et al studied data from 549,078 patients with suspected cardiac ischemia presenting to the ED, observation unit, or an inpatient unit at 224 US hospitals in 2010, from an administrative/operational database (Premier Inc). Patients with acute myocardial infarction (AMI) were excluded. The researchers sought to investigate the use of noninvasive cardiac imaging in these patients and its association with downstream resource utilization, including inpatient hospitalization, coronary angiography, and revascularization (percutaneous coronary intervention [PCI] or coronary artery bypass graft [CABG] surgery) within 2 months of index hospital visit, and readmission for AMI within 2 months.

Hospitals were divided into quartiles based on the proportion of patients who received noninvasive imaging tests for cardiac ischemia, from Q1, with the lowest proportion, to Q4, with the highest. There were 56 hospitals in each quartile. Hospitals primarily served urban populations (88%) and were non-teaching institutions (66%). The median number of hospital beds was 360.

The median noninvasive cardiac imaging rate for hospitals was 19.8% (range, 0.2%-55.7%). The median rates of imaging for hospital quartiles were Q1, 6.0%; Q2, 15.9%; Q3, 23.5%; and Q4, 34.8%. Hospitals in higher imaging quartiles were more likely to be located in the Midwest and Northeast (P < .001). The majority of imaging tests were nuclear stress myocardial perfusion imaging (80.4%), followed by echocardiograms (16.6%), and only 1.2% were CCTA. There were no significant differences between quartiles for the rates of specific modality use when performing noninvasive cardiac imaging.

Despite the differences in imaging rates and downstream resource utilization, all quartiles had a similar proportion of patients readmitted for AMI within the same or the subsequent month (0.3% for all quartiles; P = .51).

Approximately 23% of the variation in rates of noninvasive cardiac imaging was attributable to Hospital Variation in Use of Noninvasive Cardiac Imaging Mushabbar A. Syed, MD, FACC between-hospital variation. This variation was not significantly affected by hospital patient mix. Most of the variation was a factor of the individual hospital where care was provided. A randomly selected patient receiving noninvasive cardiac imaging at a particular hospital would have approximately 2-fold higher odds of receiving an imaging test than an identical patient at a different randomly selected hospital.

In conclusion, the study showed substantial hospital- level variation in the use of noninvasive imaging for cardiac ischemia in patients without AMI. Higher rates of imaging use at the hospital level were associated with greater rates of inpatient admission and use of downstream coronary angiography without evidence of a substantial effect on the use of therapeutic interventions or short-term outcomes.

Each year more than 8 million patients in the United States present with chest pain. These patients are a heterogeneous group with a mostly benign origin of chest pain; however, their evaluation is costly and requires significant resource utilization. Lack of consensus in the management of patients with suspected coronary ischemia has led to the development of several diagnostic pathways based on individual hospitals’ organizational, financial, and cultural factors. These pathways include creation of dedicated chest pain units or use of mandatory noninvasive cardiac imaging. Earlier studies have shown an increase in downstream invasive testing when noninvasive cardiac imaging is frequently used.1 To justify use of cardiac imaging in routine evaluation of patients suspected of coronary ischemia, there is a need to show improvement in patient outcomes with this approach.

In 2010, the American Heart Association (AHA) published a scientific statement on testing of low-risk patients presenting to the ED with chest pain.2 These guidelines favor the approach of an accelerated diagnostic protocol (ADP) comprising serial electrocardiograms and cardiac injury biomarkers to exclude acute coronary syndrome. Patients with negative findings usually complete the ADP with a confirmatory test to exclude ischemia. A negative ADP evaluation allows discharge, whereas patients with positive findings are admitted. Most of this evaluation is completed in a chest pain or observation unit rather than an inpatient unit. This approach has been found to be safe, accurate, and cost-effective in low-risk patients presenting with chest pain. AHA guidelines emphasize that the primary goal of evaluation in these patients is accurate risk stratification with exclusion of acute coronary syndrome and other life-threatening causes of chest pain rather than diagnosis of coronary artery disease. However, the ADP does favor routine evaluation with a provocative test of ischemia by stress testing with or without imaging or detection of anatomical coronary artery disease by coronary CT. Most of the data favoring this approach are based on reduction in the length of stay and costs, with limited information on downstream resource utilization and outcomes.

The study by Safavi et al3 examined the variation between hospitals in the use of noninvasive cardiac imaging tests in patients suspected of coronary ischemia without acute MI, the impact of these imaging tests on downstream coronary angiography, and revascularization and 60-day readmission rates with acute MI. The study used a large patient database from 224 US hospitals and found significant variations in the use of routine cardiac imaging testing for evaluation of coronary ischemia. The differences in patient case mix between hospitals did not account for a majority of the variation; rather, the likelihood of a given testing strategy depended mostly upon individual hospital factors. A majority of cardiac imaging tests performed were nuclear stress myocardial perfusion imaging. Higher rates of cardiac imaging testing were associated with increased inpatient hospitalization and use of coronary angiography without significant benefit in terms of revascularization or acute MI readmission in the short term.

Several limitations of this study should be considered. The authors used an administrative/ organizational database that only included some clinical information. Clinical decisions at the level of individual patients or individual hospital practice pattern could not be assessed. Many hospitals use site-specific protocols for diagnostic evaluation of patients with suspected coronary ischemia, and additional work is needed to understand the interplay of organizational, cultural, and financial aspects of hospital practice. No information is available on the appropriateness of imaging tests in individual patients. Patient follow-up may have been incomplete if they sought care at multiple hospitals for downstream testing or follow-up care rather than at the index hospital.

Findings of this study by Safavi et al suggest that routine noninvasive cardiac imaging testing is unnecessary in patients suspected of coronary ischemia. This practice not only increases the downstream resource utilization but also does not provide significant benefit in terms of improved patient outcomes. Further study is needed to understand the individual hospital factors associated with increased utilization of cardiac imaging testing.

2. Amsterdam EA, Kirk JD, Bluemke DA, et al; on behalf of the American Heart Association Exercise, Cardiac Rehabilitation, and Prevention Committee of the Council on Clinical Cardiology, Council on Cardiovascular Nursing, and Interdisciplinary Council on Quality of Care and Outcomes Research. Testing of low-risk patients presenting to the emergency department with chest pain: a scientific statement from the American Heart Association. Circulation. 2010;122:1756-1776.

is Director of Cardiovascular Imaging and Rolf and Merian Gunner Professor of Medicine (Cardiology), Radiology and Cell & Molecular Physiology at Loyola University of Chicago’s Stritch School of Medicine. He received his MD from King Edward Medical College, Lahore, Pakistan, and completed residencies in Pakistan, Great Britain, and at Henry Ford Hospital in Detroit, MI, where he also completed fellowships in cardiology and echocardiography. He also completed a fellowship in cardiovascular MRI at the National Institutes of Health. His areas of interest include cardiovascular imaging, structural heart disease, and coronary artery disease. 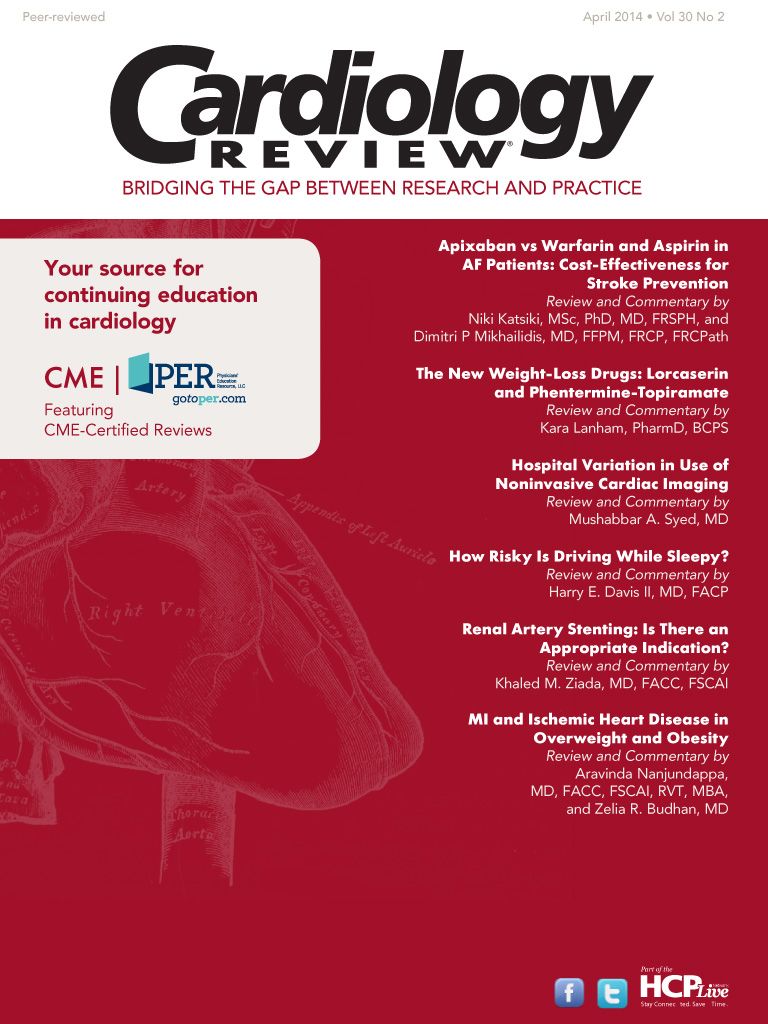