Clinicians who treat patients with postherpetic neuralgia (PHN) can select from a wide range of agents that have been shown to have some clinical efficacy, including topical analgesics such as the lidocaine patch.

The authors of a recent study in the Annals of Dermatology comparing the use of lidocaine versus piroxicam patch in the treatment of PHN wrote that, although oral medications such as opiates, tricyclic antidepressants, and anticonvulsants are currently recommended for the treatment of PHN, “in clinical practice these agents frequently result in a poor therapeutic response and intolerable side-effects, especially in patients of advanced age.” Thus, “there is a need for more effective and better-tolerated therapies.” One such candidate may be lidocaine patch and other topical analgesics. Topical administration of lidocaine has been shown to be an effective and well-tolerated treatment for PHN. The ease of use and tolerability associated with topical analgesics such as the lidocaine patch may make them particularly attractive for use in elderly patients (who are at high risk for herpes zoster and PHN) with underlying conditions that complicate the use of some oral medications. However, as noted by the study authors, lidocaine is contraindicated in patients with a history of neurosurgery or cardiovascular problems, and is not recommended in patients who have hypersensitivity to topical amide anesthetics (http://bit.ly/uc7L77).

Accordingly, they conducted a small study to compare the efficacy of piroxicam patch (48 mg) with lidocaine patch (700 mg) in patients with PHN. They randomized 18 patients to receive lidocaine, piroxicam, or placebo/control patches over three sessions (patches were worn for 12 hours), with no more than three patches applied to the patients’ most painful areas for three consecutive days. Sessions were conducted seven days apart. The researchers measured changes in visual analog scale (VAS) scores based on pain intensity, quality of sleep, and adverse effects. Their results indicated that although treatment with lidocaine patch produced a “better, more rapid response, overall than treatment with piroxicam patch, both modalities “significantly reduced the mean VAS scores of pain intensity of all different types.”

Guidelines for the Treatment of Postherpetic Neuralgia

International Association for the Study of Pain

There is strong evidence that “Tricyclic antidepressants (amitriptyline, nortriptyline, desipramine, and maprotiline), gabapentin, pregabalin, opioids, and topical lidocaine patches are effective and should be used in the treatment of postherpetic neuralgia” (http://bit.ly/tNRBYx). All recommendations for the pharmacological treatment of neuropathic pain now propose antiepileptics (gabapentin or pregabalin), TCA or SNRI antidepressants, or topical lidocaine as the first line of treatment for neuropathic pain in general or for specific neuropathic pain conditions,” such as PHN (http://bit.ly/rzUtK4). Evidence supports “treating postherpetic neuralgia with tricyclic antidepressants, gabapentin, pregabalin, long-acting opioids, or tramadol; moderate evidence supports the use of capsaicin cream or a lidocaine patch as a second-line agent” (http://bit.ly/lPhcdB).

Interestingly, although the researchers noted that “both the lidocaine and piroxicam patches continuously showed a significant reduction in the intensity of the pain,” they reported that the degree of pain relief differed depending on the treatment, with the lidocaine patch treatment providing faster and better effects for allodynia, hypoesthesia, and paresthesia than treatment with the piroxicam patch. Treatment with the piroxicam patch produced faster and more lasting relief for “dull pain.” The authors reported “no significant differences between the two patches for burning sensation and prickling sensation.” Although treatment with both types of patches was safe and well tolerated, with a low frequency of skin irritation, the authors cautioned that “patients with cardiovascular abnormalities, especially of the conductive system, are not candidates for the lidocaine patch.”

Although there are other topical agents (such as piroxicam, as noted in the study mentioned above) that have been shown to have some efficacy in the treatment of PHN, there is not sufficient clinical evidence to recommend the use of any specific product. Therefore, clinicians should make treatment decisions based on the needs of each individual patient, and heed the advice of the authors of a “concise review for clinicians” in Mayo Clinic Proceedings (http://bit.ly/u4V4tt), who cautioned physicians who treat patients with PHN to keep in mind that although “there is no intervention that reliably relieves the pain of PHN,” and that “effective therapy often requires multiple drugs,” it is advisable to begin treatment with a dose that is lower than the anticipated effective level of a given agent in order to increase the likelihood of a beneficial effect before the onset of adverse effects. Clinicians may want to “begin with a medication that either has the fewest adverse effects or that is perhaps associated with desirable side effects.” Topical medications such as lidocaine patch, which the authors noted “are almost always free of systemic adverse effects,” are good candidates 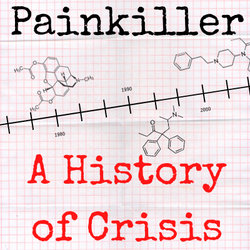 Introducing Painkiller: A History of Crisis