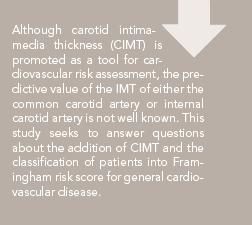 This study had two main objectives:

1. To investigate whether IMT of the common carotid artery and the internal carotid artery would add to the predictive value of Framingham risk factors for new-onset cardiovascular events.

2. To investigate if the addition of CIMT would improve the classification of patients into Framingham risk scores (FRS) for general cardiovascular disease (calculated as 8-year score for this study): low risk, 0 to <6%; intermediate risk, 6% to 20%; and high risk, >20%.

This study was conducted in members of the Framingham Offspring Study cohort, composed of non-Hispanic whites, from February 1995 through September 1998. Of 3,532 persons screened, 2,965 met the inclusion criteria of no prior cardiovascular disease and interpretable carotid images. Study participants were followed for an average of 7.2 years.

Multivariate Cox proportional hazard models were generated with the original components of the 10-year FRS. Presence or absence of hypertensive treatment was added to the models. Two separate models were then created by adding the mean common carotid artery IMT and the maximum internal carotid artery IMT as separate predictor variables. The incremental value of adding CIMT to FRS for predicting cardiovascular events was evaluated with the net reclassification index, which helps ascertain whether addition of CIMT would reclassify persons in whom cardiovascular disease developed to a higher-risk category and those in whom cardiovascular disease did not develop to a lower-risk category.

The mean age of study participants was 58 ± 10 years; 55.3% were women. A total of 296 subjects experienced a first-time cardiovascular event. The results in reference to the study objectives are summarized below and in the Table.

Study objective 2: The inclusion of maximum IMT of the internal carotid artery significantly improved the net reclassification index (5.8% for events, 1.8% for participant without cardiovascular events, and 7.6% overall; P <0.001).

A Step Forward for CIMT

his study by Polak et al confirms the findings of previous epidemiological studies that CIMT has independent value in predicting cardiovascular events. The results show that IMT of the internal carotid artery, but not of the common carotid artery, significantly improves the cardiovascular risk prediction beyond the traditional risk factors and modestly improves FRS classification.

A major limitation of the study is the limited applicability to nonwhite races and other ethnic groups. The follow-up was relatively short: 7.2 years compared with a 10-year period for which FRS is calculated. To obtain high-quality measurements, the investigators relied on a single experienced and supervised sonographer, which is difficult to replicate in a primary care setting.

FRS is routinely used in a clinical primary prevention setting for risk stratification; however, the FRS has recognized limitations there.1 Its accuracy is somewhat limited among certain specific populations, and some wellknown risk factors including family history and some components of the metabolic syndrome are not incorporated in the score.2

Limitations of making treatment decisions based on FRS were highlighted in a study of 222 previously asymptomatic patients presenting with first acute myocardial infarction. Based on their FRS, 75% would not have been eligible for statin use under the current guidelines.3 Limitations of the FRS have led to increasing interest in refining risk stratification by addition of subclinical atherosclerosis imaging and biomarkers such as C-reactive protein. Because atherosclerosis is a systemic process and involves various vascular beds, this can be imaged using coronary calcium scoring, ankle-brachial index, and CIMT. CIMT detects atherosclerosis in carotid arteries, and studies have shown its association with cardiovascular risk factors, prevalence of cardiovascular disease, and cardiovascular events.4,5 CIMT has also been used as a surrogate end point for determining the success of interventions targeted at low-density or high-density lipoprotein.6 The advantages of CIMT include noninvasiveness, low cost, and no radiation exposure. The technical limitations are related to sonographer’s experience, equipment used, site of measurement, accuracy and mode of measurements, reproducibility, and difficulty in standardization. B-mode ultrasonography is preferred over M-mode, with images acquired at end-diastole with a linear-array transducer operating at a fundamental frequency of at least 7 MHz. Measurement of IMT of the common carotid artery has better reproducibility than that of the internal carotid artery because of its ease of access; however, based on the results of the current study, the internal carotid artery IMT measurements have better predictive value. A high-risk CIMT result is defined as ≥75th percentile adjusted for the patient’s age, sex, and ethnicity.7

In 2010, the American College of Cardiology Foundation and the American Heart Association released guidelines for assessment of cardiovascular risk in asymptomatic adults.8 The guidelines state that CIMT may be beneficial in people at intermediate risk, but only if the required equipment, technical approach, and operator training and experience are carefully followed to achieve a high-quality result. The guideline writing group assigned CIMT to category IIa with evidence level B, indicating that CIMT is reasonable in intermediate-risk patients and that the benefits outweigh the risks, but more studies with focused objectives are needed before the group can definitely recommend that CIMT should always be performed. The guidelines note that further research is needed on the optimal timing to begin risk assessment and repeat risk assessment in the asymptomatic patients. There is currently no recommendation for CIMT use for the purpose of modifying lipid-lowering therapy. The study by Polak et al is a step forward for CIMT in refining cardiovascular risk in the primary care setting. Further studies are needed to investigate the role of CIMT in the management of individual patients and improving patient outcomes.

Mushabbar A. Syed, MD, FACC, is Director of Cardiovascular Imaging, and Associate Professor of Medicine (Cardiology) and Radiology at Loyola University of Chicago’s Stritch School of Medicine. He received his MD from King Edward Medical College, Lahore, Pakistan, and completed residencies in Pakistan, Great Britain, and at Henry Ford Hospital, in Detroit, MI, where he completed fellowships in cardiology and echocardiography. He also completed a fellowship in Cardiovascular MRI at the National Institutes of Health. His areas of interest include coronary artery disease, heart disease diagnosis without cardiac catheterization, and valvular heart disease.