Impact of Revascularization Clinical Guideline Recommendations on US Clinical Practice 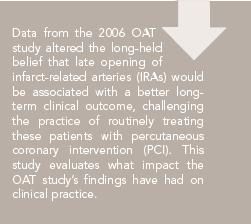 eperfusion therapy has had a dramatic impact on the outcome of patients presenting with myocardial infarction (MI). Multiple studies have shown that an open infarctrelated artery (IRA) is associated with better outcome in patients with ST elevation MI (STEMI), and contemporary reperfusion therapy is aimed at ensuring an open IRA.1

The benefits of reperfusion therapy decline with increasing delay between symptom onset and time to reperfusion; however, based on observational studies as well as small randomized controlled trials evaluating surrogate end points, it had been believed that late opening of the IRA would be associated with a better long-term clinical outcome. Thus, these patients have routinely been treated with percutaneous coronary intervention (PCI).

As has been true for many other apparently logical clinical dogmas, a large, adequately powered randomized controlled trial was not able to corroborate these beliefs. The 2006 Open Artery Trial (OAT) randomized 2,166 stable patients who had total occlusion of the IRA 3 to 28 days after MI, and who met one of two high-risk criteria (ejection fraction of <50% or proximal occlusion), to routine PCI and stenting with optimal medical therapy, versus only optimal medical therapy.2 The OAT trial demonstrated no statistical difference between the two arms of the study for the primary end point (a composite of death, myocardial reinfarction, or New York Heart Association [NYHA] class IV heart failure), or any of the components of the end point over a 4-year follow-up period. The clinical impact of the OAT study on clinical practice had not been previously evaluated, and was the subject of Deyell et al’s study.

The authors assessed the impact of the OAT trial and revised American College of Cardiology (ACC)/American Heart Association (AHA) guidelines on the use of PCI in patients with late presentation after MI.3 Their study population comprised patients who underwent PCI for STEMI or unstable angina and non-ST elevation MI (NSTEMI) at 1,042 hospitals that participated in the National Cardiovascular Data Registry (NCDR) and its CathPCI Registry.

The use of PCI was assessed in patients who underwent PCI between January 2005 and December 2008 for an occluded artery with an interval from symptom onset to admission that was greater than 24 hours or at least 2 calendar days. The trends in the monthly rate of PCI for occlusions after MI were compared across three time points: (1) prior to publication of the OAT (January 1, 2005, to November 30, 2006), (2) after publication of the OAT but before revision of practice guidelines (December 1, 2006, to November 30, 2007), and (3) after revision of guidelines reflecting the OAT data (December 1, 2007, to December 31, 2008).

Of the 670,043 PCI procedures performed during the study period, 28,780 (4.2%) met the study inclusion criteria. Of these, approximately 90% of the procedures were performed in patients presenting with NSTEMI, and over half of the patients had a positive functional study. Most patients had one-vessel (44%) or two-vessel (50%) disease, and multivessel PCI was performed in 12% of patients. Drug-eluting stents were used in 64% of the patients.

PCI was performed in 53% of the patients with an occluded artery. Overall, 25% of the patients did not undergo PCI; PCI of the non-occluded vessel was performed in the rest (nearly 22%). There was a small but significant decline in the use of PCI for persistent occlusions, from 54.2% before publication of OAT data to 52.8% after publication of OAT data and 51.9% after guideline revisions.

This analysis was based on a total of 5,542 patients with qualifying occlusions, of whom 41.9% did not receive PCI, 17.7% underwent PCI of a non-occluded vessel, and the remaining 40.4% underwent PCI of an occlusion. The crude rate of PCI for total occlusions declined significantly from 42.4% prior to the OAT to 39.9% after the OAT but before the guideline revisions, and to 38.5% after the guideline revisions (P = 0.01).

The authors evaluated multiple subgroups on the basis of heart failure symptoms at presentation, insurance payer, geographical region, or hospital type, but no significant change in use of PCI was noted in any risk group following the publication of the OAT trial or revision of guidelines.

The Impact of Clinical Trials on Changing Practice

his study aimed to evaluate the impact of the OAT trial, and concluded that the trial had no impact on clinical practice. A large number of patients continue to undergo PCI for a futile indication. Multiple studies have demonstrated delays in adoption of the results of clinical trials, although there are some data to suggest that practices associated with possible harm are rapidly modified.4

Several limitations of this study must be noted. The CathPCI registry has mandatory tracking of all PCI procedures at the participating institutions, yet only a subset of institutions submit diagnostic catheterization data, and the proportion of patients who undergo PCI for late presentation of an occluded artery may have been exaggerated by this analysis.

Furthermore, the patients included in this analysis were not typical of patients who were enrolled in OAT. The OAT trial assessed patients presenting between 3 and 28 days after MI, compared with a delay of 24 hours in this analysis. Over 85% of patients enrolled in OAT had ST elevations or a Q-wave MI, whereas this study predominantly evaluated patients with NSTEMI. No data are available assessing symptom status, such as post-MI angina, or the severity of ischemia on noninvasive testing, both conditions that would have excluded enrollment in the OAT.

These limitations notwithstanding, the results of this study demonstrate the slow impact clinical trials have on changing practice, especially when there are long-established practice patterns and clinical beliefs, economic incentives, and a patient and physician preference for doing something further instead of “just” medical therapy.5 Indeed, OAT is regarded by many physicians as a trial of STEMI patients, and the extrapolation of these data to a population of overwhelmingly NSTEMI patients may not be fully justified. It is important to note that patients with STEMI who underwent PCI for late occlusion made up only 0.4% of all PCI procedures performed during the study period.

It is unlikely, however, that PCI of an occluded artery would have clinical benefits in patients with NSTEMI that would not be evident in patients with STEMI, and a majority of patients identified in this study could have been treated with medical therapy only. Further research is needed to define how many of these PCI procedures are truly inappropriate, and to develop mechanisms to reduce the application of ineffective and expensive treatments that add to growing health care costs and carry a small but real risk of major adverse events.

Hitinder S. Gurm, MD , is Associate Professor, Director of Inpatient Cardiology Services, and Director of Carotid Interventions in Cardiovascular Medicine in the Division of Cardiovascular Medicine at the University of Michigan Cardiovascular Center in Ann Arbor. He received his MD from Christian Medical College in Ludhiana, India, and completed his Residency and Fellowships at Cleveland Clinic Foundation. His research interests include outcomes research and quality improvement in percutaneous coronary and peripheral interventions and endovascular therapy of carotid disease. He is principal investigator for two ongoing clinical trials.