The 10 Worst Things Patients Can Say to Physicians

Most patients are well-meaning and generally nice. But every now and then, you will get one who is a total pain to deal with. Maybe your patient lies to you, gets sarcastic, asks for special Ã¢â‚¬Å“favors,Ã¢â‚¬ or generally just pushes your buttons. WeÃ¢â‚¬â„¢ve all been there. 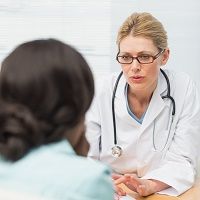 Most patients are well-meaning and generally nice. But every now and then, you will get one who is a total pain to deal with. Maybe your patient lies to you, gets sarcastic, asks for special “favors,” or generally just pushes your buttons. We’ve all been there.

In fact, an article I read on CNN.com stated that doctors report having a “difficult” encounter with one out of every six patients. With some of the primary care docs seeing 24-30 patients a day, the number of difficult patients can add up every day and every week. It’s no wonder why burnout rates are so high!

When patients say certain things to doctors, it can jeopardize the patient’s health, make treatments less effective, and ruin the doctor-patient relationship. Here is a list of things that patients should avoid saying:

1. Anything that is not 100 percent truthful

I could probably write an entire blog just on this. When patients downplay or exaggerate symptoms, lifestyle choices, pain level, or side effects, they usually don’t realize that it can affect their quality of life—and the quality of the treatment that they receive. Lying can also be dangerous, as it could cause potential medication overdoses or interactions. Dr. House may say that all patients lie, but I think they sometimes just don’t see the harm in not telling you something.

2. Anything condescending, loud, hostile, or sarcastic

3. Anything related to your health care when we are off the clock

Doctors are entitled to a personal life, which includes going out in public on occasion. When patients run into doctors at restaurants, on the golf course, or at a community event, they should avoid asking for medical advice. Just like patients, doctors don’t want to work when they are off the clock. There’s also this little thing called HIPAA!

4. Complaining about other doctors

When patients complain about other doctors, it usually throws up huge red flags that say, “THIS PATIENT IS DIFFICULT (and may try to sue me someday).” At best, it will make the doctor walk on eggshells. At worst, it will cause the doctor to try to avoid the complaining patient.

5. Anything that is a huge overreaction

Yes, doctors must display empathy and sometimes have to deliver bad news to patients who then experience strong emotional reactions. However, patients should check their strong emotions at the door and avoid overreacting to minor incidents, such as cuts, scrapes, or a case of pink eye.

6. Anything that involves asking for a “favor” that will get you in trouble

Maybe the patient’s mom wants you to take a “quick look” at the sibling who doesn’t have an appointment (or insurance), you know, under the radar. Or, maybe the patient wants you to tell their employer that they need more time off when they actually are able to return to work. Patients need to realize that doctors are not above the laws of the land—or the laws of insurance&mdash;and stop asking for special treatment.

7. Anything that starts with, “Well, I read this article on the Internet and I think I have …”

Don’t get me wrong—it is never a bad thing when a patient takes an interest in his or her care and wants to learn more about a medical condition by reading articles online. However, self-diagnosing without first talking to a medical professional is a slippery slope that can cause patients unwarranted anxiety, and can sometimes lead to disastrous consequences from self-treating conditions that may or may not exist.

8. Anything that is overly demanding

As I said before, doctors are patients’ partners in health care. They are not servants. Constantly demanding treatments, tests, medications, and referrals makes it very hard for a doctor to actually have the time to get to the root of a patient’s medical issues.

9. Any type of incessant questioning

Doctors quickly become wary of patients who show up with a list of 30+ questions about their medical condition(s). Of course, it is normal for a patient to be curious about his or her condition and care plan, but questioning the doctor’s every move can cause the doctor to steer clear whenever possible.

10. Dropping a bomb … at the end of the appointment

A good way to really annoy a doctor is to wait until the end of the appointment to raise a MAJOR concern — the so-called “doorknob question.” Patients should always bring up their most pressing concerns first to ensure that they receive adequate time and attention.