Traditional wedding vows say â€œtill death do us part,â€ but it looks like men have a tougher time when that time comes. 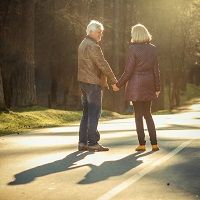 Traditional wedding vows say “till death do us part,” but it looks like men have a tougher time when that time comes. A new study indicates that men experience more negative health outcomes when their wives die than women do when their husbands die.

Marital status has a prominent influence on health in general. Previous studies have shown that widowhood increases the risk of disability and depression is more common in those who are separated when compared to unmarried people. Researchers from the University of Padova in Italy explored the physical and emotional differences that the genders experience when their spouses pass away.

Frailty — characterized by weakness, exhaustion, and physical activity level – is expected with old age, but additional factors can play into it as well. As described in the Journal of Women’s Health, the team examined 1,887 men and women older than 65 years. The participants were separated by marital status and followed for an average of 4.4 years to record new cases of frailty — a condition that none of them had at baseline. About 50% of the cohort was married, 42% were widowed, and 8% had never been married.

A total of 414 frailty diagnoses (21.9%) were made by the end of the follow-up period. When compared to married men, widowed men were more likely to develop the condition. The exact opposite, however, was true for women.

“Unlike the results seen for male gender, widowed women showed a significantly lower risk of frailty than married women, with a lower incidence of unintentional weight loss or low daily activity levels,” the authors confirmed.

Psychological differences also emerged in the data. The women in the study were better able to handle the stress caused from losing their husbands. On the other hand, there was a significant increase in the risk of depression for men who lost their wives.

“In fact, the presence of a wife may bring material benefits for men in terms of household management and healthcare, whereas women are more likely to feel stressed and find their role restrictive and frustrating,” the researchers wrote. Women tend to express their emotions more freely, which could also contribute to better coping.

Women typically live longer than men, so acting as a caregiver to their ill spouse can wear them down. When that factor is paired with the stereotypical gender roles that many older couples follow — like who takes care of the laundry and grocery shopping – men can have a harder moving on independently.

Also on MD Magazine >>> Battle of the Sexes: Have Researchers Discovered Why Men and Women Experience Pain Differently?