Phase 2a Trial Reports Positive Efficacy of AZP-3601 for Hypoparathyroidism 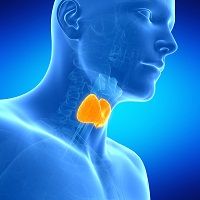 New Phase 2a data from the second patient cohort of an ongoing clinical trial indicate the positive safety and efficacy of AZP-3601 for the treatment of hypoparathyroidism.

The findings, from Amolyt Pharma, reported AZP-3601 was well-tolerated and consistent with the data from Cohort 1. At the end of the 3-month treatment period, daily administration allowed 93% of patients to discontinue standard of care therapy (calcium and vitamin D supplementation), while mean serum calcium was maintained within the target range.

An investigational therapeutic peptide, AZP-3601 is designed to target a specific conformation of the parathyroid hormone (PTH) receptor to safely produce sustained and stable levels of calcium in the blood and manage the symptoms of hypoparathyroidism.

With AZP-3601, the mean 24-hour urinary calcium was rapidly normalized in all but one patient, including those with hypercalciuria at baseline. Bone turnover biomarkers increased after two weeks of treatment and remained consistent with a balanced increase in bone biomarkers, while bone mineral density (BMD) was stable. AZP-3601 was linked to no serious adverse events, with only mild to moderate adverse events, consistent with prior studies.

“We are very pleased to see that the safety and efficacy data from Cohort 2 validate the findings from the first cohort of patients in this study,” said Mark Sumeray MD, chief medical officer at Amolyt Pharma in a statement. “We observed success in the control of serum calcium and elimination of active vitamin D and oral calcium at levels that were even better than those achieved in Cohort 1.”

A total of 16 patients with hypoparathyroidism received daily subcutaneous injections of AZP-3601 during a four-week main treatment period, followed by an eight-week extension. It was initiated at a starting dose of 10 mg while calcium and vitamin D supplementation were progressively removed.

The dose could be increased to 20 mg after two weeks of treatment until the end of the main period. In the extension phase, further individual titration of AZP-3601 was allowed up to a maximum dose of 80 mg per day.

The statement reported the lower starting dose (10 mg) used in this cohort required an early up-titration to 20 mg in most patients after two weeks to allow discontinuation of oral vitamin D and calcium supplementation. This supports the selection of 20µg as the starting dose for the Phase 3 trial.

Data from both cohorts supported the planned initiation of the Phase 3 trial for AZP-3601, according to the release.

“The data are very encouraging for the future development of AZP-3601,” added Thierry Abribat, PhD, Chief Executive Officer, Amolyt Pharma. “Over recent weeks, as we have discussed the emerging efficacy and safety profile of this novel PTH1 receptor agonist with experts in the management of hypoparathyroidism, it has become increasingly clear that the observed rapid normalization of mean urinary calcium excretion combined with balanced resumption of bone turnover supports the potential of AZP-3601 to uniquely address the key treatment goals for these patients."