EP: 4.Expert Perspectives into the Utilization of JAK Inhibitors in Patients with Dermatologic Conditions

EP: 5.Efficacy and Safety of JAK Inhibitors in Atopic Dermatitis

EP: 7.The Role of JAK Inhibitors in Treatment of Vitiligo and Alopecia Areata

EP: 9.Use of JAK Inhibitors in Granuloma Annulare, Sarcoidosis, and Lichen Planus

Jerry Bagel, MD, MS: The topical JAKs [Janus kinase Inhibitors], could you talk about the topical JAKs, what their indications are, where you might use them, and risks?

Jerry Bagel, MD, MS: It’s nice to be able to write 1 prescription for a patient’s total body and it’s nice for the patient not to get 3 co-pays for 3 different scripts. The question there is, can you use a topical JAK inhibitor with an oral JAK inhibitor?...

Brett King, MD, PhD: If we abide by the labels, the label for ruxolitinib 1.5% cream says not to be used in combination with anything. Truly it’s not that expensive, but it says not to be used in combination with biologics or other JAK inhibitors. That to me means that we can use it only by itself or for a patient on phototherapy. No, this isn’t how we practice medicine in dermatology. Patients very frequently need more than 1 thing. For example, I use ruxolitinib 1.5% cream in combination with dupilumab. Sometimes you really do want that particular drug because if they’re having say facial dermatitis, I’m not going to smear their face in clobetasol, and so it’s a perfect treatment.

Jerry Bagel, MD, MS: What I’ve done and I’m sure you’ve done this too: You want to get a patient on a systemic JAK or a biologic agent for their atopic dermatitis, but in the meantime, you give them a topical JAK inhibitor in the 2 to 3 weeks that it’s going to take you to see if you can get the medication approved. And then you get this figure, a 25% to 30% chance that they might be better just on the topical, then you don’t have to go to the systemic treatment. I like that approach and I agree with you, I think topical JAKs have changed really the treatment paradigm for patients with atopic dermatitis. How do you find the efficacy of the topical JAK for vitiligo?

Brett King, MD, PhD: Ruxolitinib 1.5% cream, is an enormous advancement. It’s the first FDA-approved treatment for repigmentation of vitiligo; this is a historic achievement. It is really important to communicate and for all of us to understand. The great data for ruxolitinib cream in vitiligo are for the face. If we don’t understand that and we extrapolate the data for efficacy from the face to the other body sites, we’re going to be disappointed, but again, the data say that it works less well for body sites. It works very well for the face. One-third of patients using ruxolitinib 1.5% cream, twice a day for 24 weeks (1 time per day and the efficacy will significantly drop) will have a 75% improvement in their facial vitiligo. You take all the areas, shrink them by 75%. Now over a year, that becomes 50% of patients and over that same period of time, a year, one-third of patients will have a 90% improvement in their facial vitiligo. There’s a message here, similar to the message earlier for the management of alopecia areata. This disease takes time. Everybody who’s used ruxolitinib cream in atopic dermatitis find that patients will get relief of itch promptly and their dermatitis will improve within days. Vitiligo repigmenting skin is like regrowing a hair. It takes several weeks, so we have to be patient. This is not the sort of thing where you give a patient a prescription and say, come back in 4 months to see if you’re better. We need to give this time….

Jerry Bagel, MD, MS: Do you happen to know the demographics, diversification, ethnicity in the patient populations they were dealing with?

Jerry Bagel, MD, MS: That has a major impact on kids.

Brett King, MD, PhD: Dermatologists have an important role. It’s tough to develop normally. It’s tough to go to school and learn and do the things that we’re charged with doing as children when we look really different from everybody else, when we’re missing hair, when we have white spots on our skin, when we are itchy. The approval of ruxolitinib cream down to age 12 is extremely important. By the way, this was something that I failed to point out earlier with upadacitinib’s approval for moderate to severe AD. It is also approved down to age 12. Age speaks a little bit to safety, doesn’t it?

Brett King, MD, PhD: When we have data in younger populations and we don’t see the adverse events that are keeping us up at night because of the boxed warning in those populations, I think that that tells us something about safety. For me it’s hugely important. 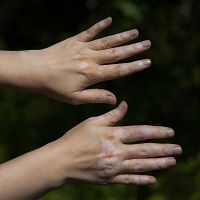