Electrophysiologic Basis of the EKG Changes of Hyperkalemia

A 68-year-old gentleman with known end-stage renal disease and chronic atrial fibrillation is being evaluated in the emergency department because of generalized weakness for 24 hours.

A 68-year-old gentleman with known end-stage renal disease and chronic atrial fibrillation is being evaluated in the emergency department because of generalized weakness for 24 hours. A 12-lead electrocardiogram is shown below. What is the diagnosis? What is the first course of action? 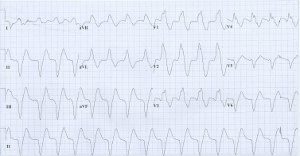 The EKG tracing is very dramatic and is diagnostic of severe hyperkalemia in the described clinical setting. Serum potassium level was 8.6 mEq/L (hemolyzed). The EKG tracing shows regular rhythm which could be secondary to development of complete heart block with accelerated junctional or idioventricular escape rhythm or resolution of atrial fibrillation (re-establishment of sinus rhythm) with sino-ventricular conduction. Severe intra ventricular conduction delay results in sine-wave morphology of the QRS complex. Intravenous calcium gluconate (10 cc of 10% solution) was given and has changed the EKG immediately to the tracing below. EKG after treatment shows reappearance of atrial fibrillation. The QRS axis and morphology after treatment are very much the same as those during hyperkalemia except the QRS is much narrower. This suggests that the wide QRS complex during hyperkalemia was not of ventricular origin but more likely secondary to sino ventricular conduction or junctonal rhythm with significant intra ventricular conduction delay. Atrial fibrillation may disappear during severe hyperkalemia because of depressed atrial conduction-see below (1,2). This patient also received intra venous insulin-glucose and intravenous sodium bicarbonate. He also underwent emergent hemodialysis. 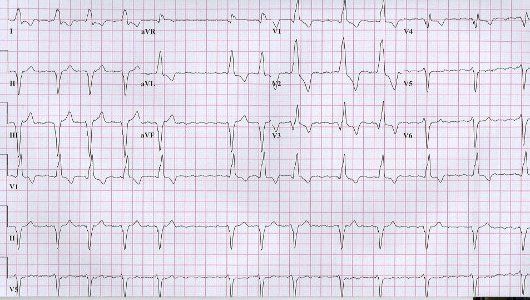 Studies validate a good correlation between the degree of hyperkalemia and EKG changes (3). In addition, there is a predictable EKG progression as the plasma potassium becomes more elevated. The following more or less sequential changes occur:

Mild levels of hyperkalemia (5.5-6.5 mEq/L) are associated with T-wave changes that are most prominently seen in leads II, III and V2-4. A progressive increase in the amplitude of the T-wave, which becomes tall, thin, narrow-based and peaked “tented”, is the first and most common change. The T-wave is of relatively short duration, approximately 150 to 250 ms, which helps distinguish it from the broad-based T-wave typically seen in the setting of acute myocardial infarction or intra-¬cerebral vascular events. T-wave changes are present in only 22% of patients with hyperkalemia. QT-interval may be normal, short or long. ST-segment may be depressed. The inverted T-wave associated with left ventricular hypertrophy may pseudo-normalize (ie, flip upright) with hyperkalemia (4). The typical T-wave changes of hyperkalemia may be masked by prior digitalis administration. In patients receiving digitalis, the proximal T-wave inversion and the low amplitude terminal T-wave of digitalis effect may normalize when hyperkalemia supervenes (5). Reversible left anterior or posterior fascicular block may also occur.

Ikr current, which is responsible for phase 2 and 3 of the ventricular myocyte action potential is sensitive to extra cellular potassium level and as this level increases, potassium conductance is increased secondary to unknown mechanisms. This results in an in¬crease in the slope of phases 2 and 3 of the action potential and shortening of the terminal part of repolarization causing ST-seg¬ment depression, peaked T-waves and QT-interval shortening(6).

As hyperkalemia progresses (6.5-7.5 mEq/L), the P-wave increases in duration and decreases in amplitude, and PR and QRS intervals widen. The QT-interval prolongs. Other changes include decreased amplitude of the R-wave with concomitant increased depth of the S-wave and ST-segment depression or elevation. This appears as intra-venticular conduction delay that may make the QRS complex mimic that of left or right bundle branch block configuration. A clue that these EKG changes are due to hyper¬kalemia and not to bundle branch disease, is that in hyperkalemia the conduction delay persists throughout the QRS complex and not just in the initial or terminal portions as seen in left and right bundle branch block, respectively (7).

The resting membrane potential of cardiac myocytes, as all other excitable tissues, is dependent on the equilibrium potential of potassium. According to the Nernst equation, the resting membrane potential is directly related to the ratio of the intracellular to the extracellular potassium concentration. An elevation in the plasma (extracellular) potassium concentration will decrease this ratio and therefore partially depolarize the cell membrane (ie, make the resting potential less electronegative). This change will initially increase membrane excitability. However, the later effect, which is seen in patients with hyperkalemia, is different. Persistent depolarization inactivates sodium channels in the cell membrane resulting in decrease in the rate of phase 0 of the action potential, widened QRS complex and prolonged PR interval.

This also produces a net decrease in membrane excitability that may be manifested clinically by impaired cardiac conduction (8). Atrial myocardial cells are more sensitive to these changes than ventricular myocardium with pacemaker cells and specialized conduction tissues more resistant. As result, P-wave and PR-interval changes may be seen before QRS interval changes. Another consequence that is rarely reported in literature is conversion of atrial fibrillation to sinus rhythm secondary to complete atrial depolarization and inexcitability with relative resistance of the sino-atrial node to the effects of hyperkalemia (1,2). When serum potassium level decreases, the atrial myocardial cells regain excitability and may be captured from the SA nodal impulse inflicting a P wave on the surface EKG.

At plasma potassium level >7.5 mEq/L, the P-wave disappears secondary to sino ventricular conduction. This refers to the conduction of the depolarization impulse from the sinus node which is less susceptible to hyperkalemia, into the AV junctional tissue via the internodal pathways without inflicting a P-wave on the surface EKG secondary to absence of conduction through the atrial muscle. This may be similar to ventricular tachycardia, given the absence of P-waves and a widened QRS complex. However, a slow, irregular idioventricular rhythm may occur at this stage. Left bundle branch block, right bundle branch block or non-specific intra ventricular conduction delays are usually observed.

As potassium levels attain 10 mEq/L, the SA conduction no longer exists and passive junctional pacemakers supervene the electrical stimulation of the myocardium (accelerated junctional rhythm). This is followed by progressive widening of the QRS complex and the T-wave with obliteration of the ST-segment, so that the T-wave originates from the S-wave. The QRST is replaced by a smooth diphasic, sine wave. This finding is a pre-terminal event unless treatment is initiated immediately. The fatal event is either asystole, as there is complete block in ventricular conduction, or ventricular fibrillation.

At any time during this sequence, ventricular premature beats or escape beats/rhythm may develop secondary to progressive suppression of sino-atrial and atrio-ventricular conduction. Almost any arrhythmia, axis deviation and degree of heart block can occur.

In patients with acutely elevated serum potassium levels, a pseudo myocardial infarction pattern has been reported to appear as massive ST-segment elevation that develops secondary to derangement in myocyte repolarization. Interestingly, bypass tracts are more sensitive to delayed conduction secondary to hyperkalemia than the normal conductive system, which can result in normalization of the EKG changes and loss of the delta wave in patients with Wolff-Parkinson-White syndrome.

The above EKG progression is classic of but do not always accompany hyperkalemia. Metabolic alterations such as alkalosis, hypernatremia, or hypercalcemia can antagonize the trans-membrane effects of hyperkalemia and result in blunting of these EKG changes (9). On the other hand, these EKG effects are enhanced by hyponatremia, hypocalcemia or both. This explains, in part, the significant inter-patient variability in the actual serum potassium level leading to specific ECG changes. One problem with the assessment of plasma potassium is that it is often unclear whether the hyperkalemia represents a chronic or an acute condition in which the plasma potassium may still be rising. A careful history to assess the probable etiology of the hyperkalemia is mandatory, and treatment should be adjusted accordingly.

Immediate therapy is warranted if EKG changes or peripheral neuromuscular abnormalities are present, regardless of the degree of hyperkalemia (10). Parenteral calcium is indicated only for severe hyperkalemia manifested with widening of the QRS complex or loss of P-waves, but not peaked T-waves alone. Intravenous calcium is effective in reversing the EKG changes and reducing the risk of arrhythmias but does not lower serum potassium. The membrane stabilizing protective effect of calcium begins within minutes after infusion; however, it is relatively short-lived, about 30 minutes. Calcium may be given as calcium gluconate or calcium chloride which contains three times the concentration of elemental calcium compared to the earlier. The dose of calcium gluconate is 1000 mg (10 mL of a 10 percent solution) [calcium chloride: 500 to 1000 mg (5 to 10 mL of a 10 percent solution)] infused slowly over two to three minutes, with constant cardiac monitoring. Response to therapy is often prompt with visualization of changes being reversed on the EKG tracing or monitor. The dose of either formulation can be repeated after five minutes if the ECG changes persist. Calcium can effectively block the effect of extracellular potassium elevation on cardiac myocytes by restoring a more appropriate electrical gradient across the cellular membrane. However, calcium may induce toxic dysrhythmias such as asystole in digitalis toxic patients. Extravasation of calcium salts can cause tissue necrosis.