The elusive â€œviral reservoirâ€ has been seen by many as the last barrier to a cure for HIV infection since the 1997 discovery of the virusâ€™ ability to lie dormant in certain long-lived cells. Chicago researchers have found that the virus can lurk in the lymph nodes in thriving colonies. The finding could lead to a new drug target that could cure AIDS instead of just managing it. 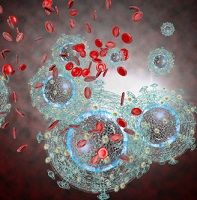 A study of HIV-1 in infected patients with undetectable viral loads reveals thriving colonies of the virus persist in lymphatic tissue during potent antiretroviral therapy (ART).

The elusive “viral reservoir” has been seen by many as the last barrier to a cure since the 1997 discovery of the virus’ ability to lie dormant in certain long-lived cells.

Writing in Nature co-authors Ramon Lorenzo-Redondo, MD, of Northwestern University Feinberg School of Medicine's Division of Infectious Disease, in Chicago, IL and Helen R. Fryer of the Institute for Emerging Infections, University of Oxford, Oxford, UK, give that barrier a good nudge.

provide new insights into the evolutionary and infection dynamics of the virus population within the host, revealing that HIV-1 can continue to replicate and replenish the viral reservoir despite potent antiretroviral therapy, the authors wrote. .

The team's effort included development of a novel mathematical model and viral sequencing of lymph tissue and blood from three HIV-infected patients.

The vehemence with which infection returns in patients whose ART is interrupted has left little doubt as to the existence of some form of latent virus.

The debate has been over the source of infection. Through examination of the lymphatic tissue of test subjects the researchers documented ongoing replication of new HIV-1 cels even where blood levels of the virus were undetectable.

Previous research suggested drug-resistant strains would be present in the event of ongoing replication of the virus.

Here the researchers found the virus was evolving over time, and neatly resolved any question the lack of drug-resistant virus might raise.

Drug resistance is caused by mutation. ART typically involves at least three drugs, and there is an inherent fitness cost to a virus in developing one mutation, let alone three. The team theorized that in regions known to have lower effective drug concentration like the lymph nodes, drug-sensitive strains tend to dominate over any compromised drug-resistant strains that emerge.

“We now have a path to a cure,” said Steven Wolinsky, MD, Infectious Disease chief, Northwestern University’s Feinberg School of Medicine. “The challenge is to deliver drugs at clinically effective concentrations to where the virus continues to replicate within the patie